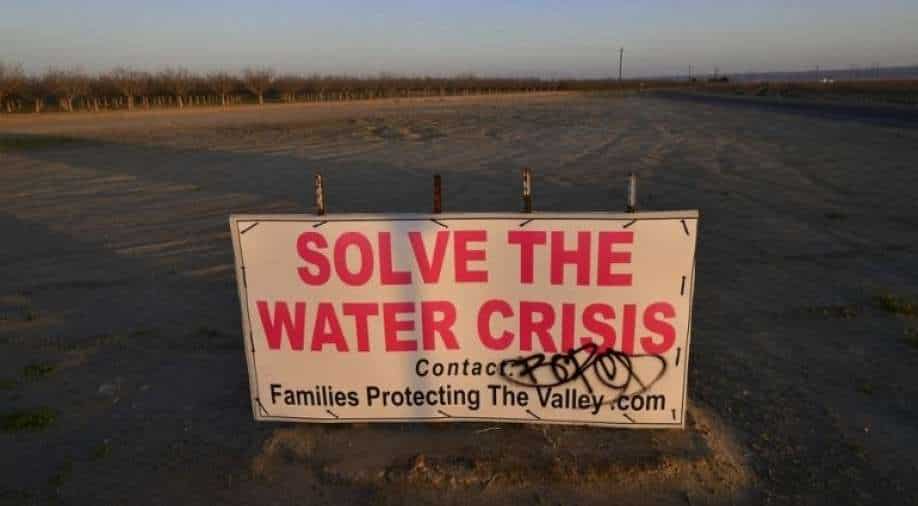 A sign calls for solving California's water crisis on the outskirts of Buttonwillow in California's Kern County on April 2, 2021, one of the top agriculture producing counties in the San Joaquin Valley where dairy, grapes, almonds, strawberries, and pista Photograph:( AFP )

Over the years, farmers, tribes, and conservationists have sparred over who has the right to use the water

The region along the California-Oregon border in the United States is witnessing one of the worst droughts in history. Owing to this, hundreds of farmers could have to suffice with less resources to irrigate.

These farmers are responsible for sustaining multiple endangered fish species that are important to local tribes in the region. To carve out a plan, the US Bureau of Reclamation will announce how the water this season will be divided after the decision was delayed by a month. The bureau is responsible for allocating water in the “Klamath” project.

Al Jazeera reported that for the first time in two decades, over 1,400 irrigators could be left without any water to farm their 225,000 acres of land. Besides local tribes, six wildlife refuges also depend on the project’s water, but may also be left without without this year.

Over the years, farmers, tribes, and conservationists have sparred over who has the right to use the water. Two tribes - the Klamath and Yurok have treaties that guarantee protection to their fisheries.

The last time water was cut off from the region was in 2001 when a protest took place whereby 15,000 people scooped up water from the Klamath River and passed it on an irrigation canal.

Also read: The country must prepare for a drought year

The Klamath Water Users Association recently sent out a warning to its members that “little to no water” would be available for irrigation from the Upper Klamath Lake. A meeting to address the crisis is set to take place on Wednesday.