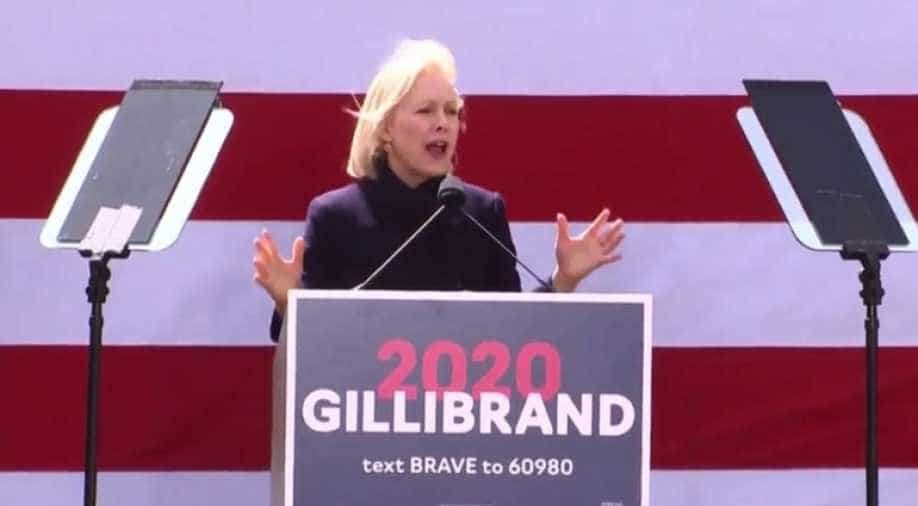 The location was intended to show voters that Gillibrand would attack Trump directly, in contrast to some Democratic rivals who have hesitated to focus on the Republican president early in the 2020 campaign.

Democratic US Senator Kirsten Gillibrand delivered a fiery first speech as an official presidential candidate in New York City on Sunday, calling US President Donald Trump a "coward" at the doorstep of one of his most famous properties.

The location in front of Trump International Hotel is intended to show voters that Gillibrand will attack Trump directly, in contrast to some Democratic rivals who have hesitated to focus on the Republican president early in the 2020 campaign.

"President Trump is tearing apart the moral fabric of our country," she told supporters adding "he demonizes the vulnerable and he punches down...Our President is a coward."

While some candidates, most notably Vermont Senator Bernie Sanders, have harshly criticized Trump, others have largely avoided using his name, as Democrats try out different tactics for confronting the divisive president.

Though Gillibrand launched her formal campaign for the Democratic nomination only a week ago, she announced she was exploring a candidacy in January and spent the last two months visiting states such as Iowa, New Hampshire and South Carolina that will hold early nominating contests next year.

She has struggled to build momentum among a group of more than 15 announced and potential candidates, including five other sitting senators and former Vice President Joe Biden, who has not yet decided but is expected to join the race.

In recent surveys, Gillibrand has remained stubbornly mired in the 1-per cent range, while other first-time presidential candidates like Kamala Harris and Elizabeth Warren, both US senators, have shown more competitiveness.

The race remains in its infancy, however, with the first nominating contest in Iowa still 10 months away.

Gillibrand, known as a moderate when she served as a congresswoman from upstate New York, has refashioned herself into a staunch progressive, calling for strict gun laws and supporting the environmental agenda known as the Green New Deal. Some liberal activists have viewed that shift with scepticism.

COVID-19 in New York came through Europe, not directly from China: Study