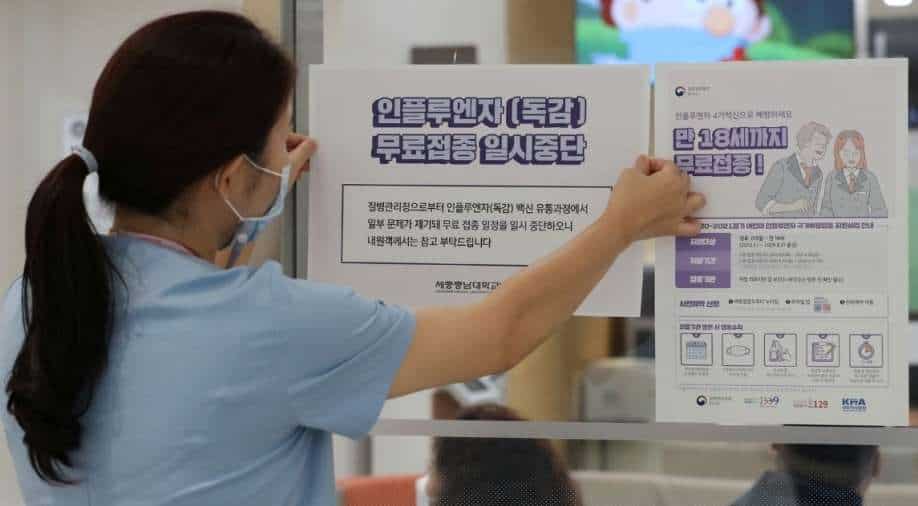 A health worker attaches a notice for suspension of influenza vaccination programs on an entrance of a hospital in Sejong, South Korea, Photograph:( Reuters )

Prime Minister Chung Sye-kyun had earlier called for an investigation into the exact cause of the deaths.

At least 25 people have died including a 17-year-old boy after South Korean authorities began their seasonal influenza inoculation effort on October 13.

South Korea's health agency said it found no links between the death of the 17-year-old and the flu shot he had taken.

The Korea Disease Control and Prevention Agency (KDCA) had said earlier that the toll has reached 25 over the past week as doctors and politicians called for a halt to the programme. However, South Korean health authorities have refused to suspend the flu shot campaign amid safety concerns over the vaccine.

Prime Minister Chung Sye-kyun had earlier called for an investigation into the exact cause of the deaths.

"So far experts said there was a low possibility that the shots and deaths were related but many citizens remain anxious," the South Korean PM had said.

The KDCA said that the flu shot was set to be administered to around 19 million teenagers and senior citizen as the KDCA director Jeong Eun-Kyeong said the vaccines would continue to be supplied.

The Korean disease control agency said that so far at least 8.3 million people have been inoculated since October 13 when the programme began with about 350 cases of adverse reactions.