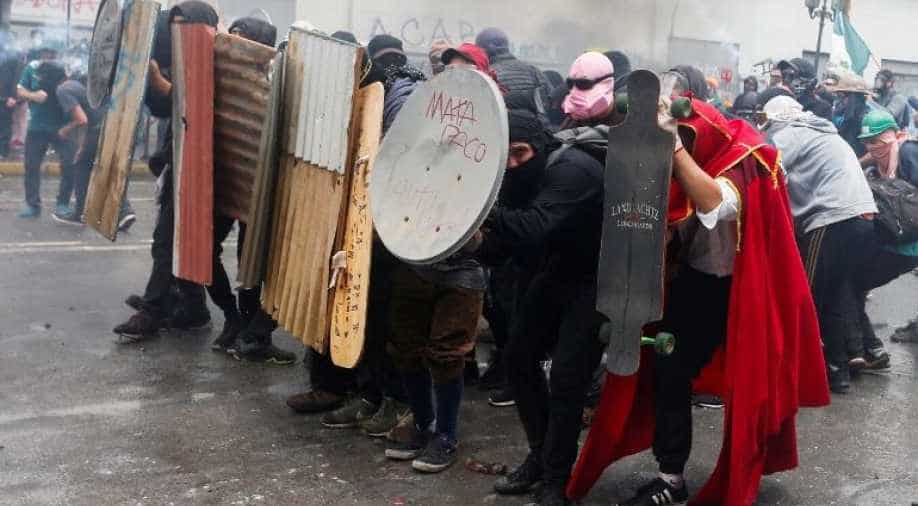 Ignacio Briones said the weakening of the peso was a "sign of worry" that he and his colleagues were watching very carefully.

Chile's finance minister warned on Tuesday of the "grave consequences" for the nation's economy of three weeks of often violent unrest after the peso slid 4 per cent to hit a historic low against the dollar.

Ignacio Briones said the weakening of the peso was a "sign of worry" that he and his colleagues were watching very carefully.

He called on Chileans to help restore "normality" so that businesses could return to the proper functioning and people could return to work after weeks of strikes, marches and damage to property and public transport that he has estimated cost the economy $3 billion.

"The peaceful marches have made their point and that message is reflected in the measures that the government and the opposition have taken," he told journalists in Santiago. "All our actions have consequences and they are having grave consequences that are now being seen in the economy and particularly on entrepreneurs and in the most vulnerable sectors."

President Sebastian Pinera, speaking at an evening news conference in Santiago, condemned new clashes between protesters and police on Tuesday night in Santiago and other parts of the country and vowed that those responsible would be prosecuted under the strict state security law that allows for tougher penalties.

"The grave situation of violence and delinquency severely threatens our democracy, our state of law and above all, the rights of all Chileans and especially of the most vulnerable," he said.

Pinera appealed to citizens to sign up to three "national accords" to restore security, promote a more equal society and develop a new constitution to replace one crafted during the 1973-1990 Augusto Pinochet dictatorship.

The country's currency plunged to more than 800 pesos per dollar, down more than 10 per cent since mid-October, by midday on Tuesday as state workers and some unionized miners in Chile announced a nationwide strike, saying they were not yet satisfied following the government's decision to rewrite the constitution.

Demonstrations across the country have sometimes devolved into arson, riots and looting, leaving at least 23 people dead, 2,000 civilians hospitalized and more than 1,000 complaints of rights abuses, according to human rights groups and prosecutors.

Thousands of people including members of unions marched in large numbers through Chilean cities again on Tuesday.

Truck drivers and other protesters set up barricades on at least two major highways connecting the capital, Santiago, with outlying cities and ports, prompting huge backups on key regional arteries.

The road blockages prompted the Valparaiso-based Congress to shut down for the day.

Most of Chile's copper mining companies said they maintained operations on Tuesday, albeit with some delays and sporadic unrest, unions and management teams told Reuters.

To date, copper production in the world's largest producer of the red metal has not been significantly hurt by weeks of protests pushing demands for improvements in pensions, health and education.

Ennio Vivaldi, the rector of the University of Chile, said the school would soon file a legal complaint after a police officer on Monday evening allegedly shot a drama student in the face during a protest. He accused the police of using "tremendous violence" against peaceful protests while failing to tackle vandalism and looting.

"Never again should there be an attack on a young man in the face with bullets from two metres away," he said. "This must stop."

In the northern city of Antofagasta, the Appeal Court issued an order requested by a civilian against the police and Interior Ministry that rubber bullets could not be used against peaceful protesters and tear gas should be "limited," a judicial authority said in a statement.

The government's spokesman, Karla Rubilar, responded that police could only use firearms where there was a threat to life.

"We could not agree more. Of course, they cannot use rubber bullets on peaceful protests," she said.