WION Web Team
Washington, United StatesUpdated: May 26, 2021, 12:02 PM IST
View in App
George Floyd’s brother Philonise Floyd speaks with other family members and lawyers outside the White House after meeting with US President Joe Biden in Washington, DC, on May 25, 2021. Philonise Floyd, George Floyd's younger brother, met with President Joe Biden at the White House on Tuesday and called for "federal laws to protect people of color." Photograph:(AFP)
Follow Us

As the US chanted 'Black Lives Matter' all around the city to mark one year since George Floyd's death, his family visited the White House to talk to the US President and urge stricter police reforms.

Floyd’s family was invited to the White House to meet Joe Biden and Vice President Kamala Harris on Tuesday in a private meeting.

It’s been one year since George Floyd was murdered. In that time, George’s family has shown extraordinary courage. Last month’s conviction was a step towards justice – but we cannot stop there.

We face an inflection point. We have to act.

This meeting was seen as a sign of change brought back by the Biden administration. The previous administration, led by Donald Trump, was infamous for lack of empathy and genuine emotion.

"It takes a lot of courage to go through it." Joe Biden said. "And they've been wonderful." Biden also laughed about how Floyd’s seven-year-old daughter asked for snacks when she came in and had cheetos and milk. 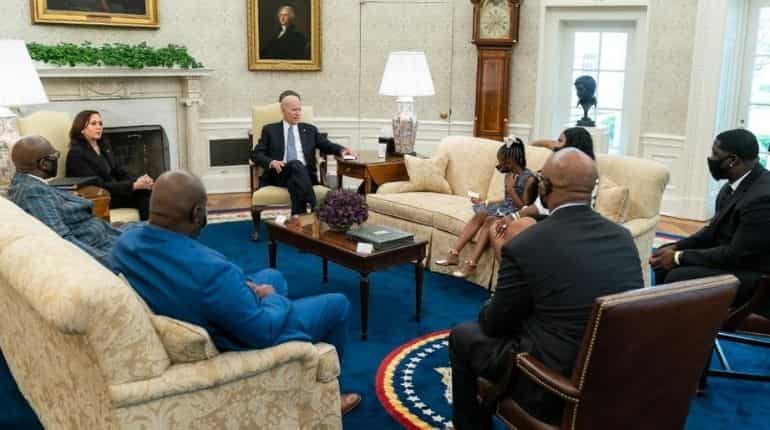 The family was more than happy to meet the Biden administration and described Biden to be a "genuine guy".

Also read | A year after George Floyd, Los Angeles confronts its future and its past

"They always speak from the heart and it's a pleasure just to be able to have the chance to meet with them when we have that opportunity to," Philonise, Floyd's brother, said.

While the private meeting, which went on for more than an hour, was criticised as a 'just for show' by some of the critics and opposition of the Biden administration, the Floyd family had an important task up their sleeve — police reform bill.

Floyd’s family has urged Biden to bring in a bill for stricter police reforms which will make sure such tragedies do not happen again.

Biden assured the family that the George Floyd Justice in Policing Act will soon be passed, under which chokeholds will be banned for the police.

"He let us know that he supports passing the bill, but he wants to make sure that it’s the right bill and not a rushed bill," Brandon Williams, Floyd’s nephew confirmed.

Floyd’s seven-year-old daughter, Gianna Floyd, was seen chanting "Say his name" while entering the White House and proudly claimed ‘daddy has changed the world’ when the leaders asked her about her deceased dad.

Ukraine to soon get $275 million military aid package from US