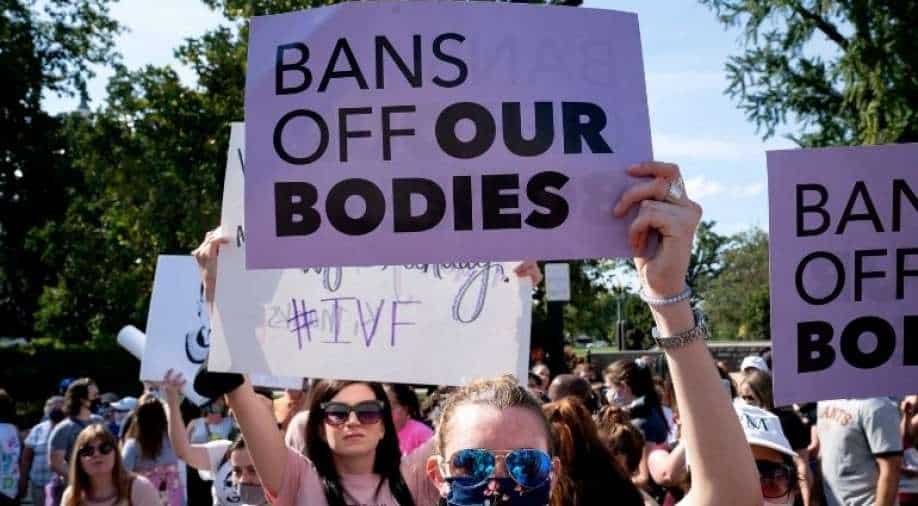 Demonstrators participate in a women’s march for abortion rights in Washington Photograph:( The New York Times )

The 2019 rule aggressively targeted organizations that offer abortions, including Planned Parenthood, and was a top priority of social conservatives during Trump’s term as president

The new rule, set to take effect Nov. 8, deals with what is known as the Title X family planning program, which was created in 1970 and subsidizes birth control, breast and cervical cancer screenings and related preventive care for millions of predominantly low-income patients.

“Our nation’s family planning clinics play a critical role in delivering health care, and today more than ever, we are making clear that access to quality family planning care includes accurate information and referrals — based on a patient’s needs and direction,” Xavier Becerra, the Health and Human Services secretary, said in a statement.

President Joe Biden signalled shortly after taking office that he intended to rescind the Trump-era rule, writing in a memorandum calling for action on women’s health issues that it put “women’s health at risk by making it harder for women to receive complete medical information."

The 2019 rule aggressively targeted organizations that offer abortions, including Planned Parenthood, and was a top priority of social conservatives during Trump’s term as president. Regulations surrounding the 1970 Title X law already banned direct funding of abortion, but organizations such as Planned Parenthood have relied on Title X money to subsidize other women’s health services, such as dispensing birth control and testing for pregnancy and sexually transmitted diseases.

The rule allowed clinics that received federal funds to offer lists of primary care providers, including those that provide prenatal care, but they could not identify which performed abortions. It also required “physical and financial separation” between family planning and abortion services at places that offered both.

Watch | Rallies held across the US against abortion ban

Alexis McGill Johnson, the president and CEO of Planned Parenthood Federation of America, called the new rule “a major victory for patients, access to sexual and reproductive health care, and health equity.”

“Title X is a critical piece of our social safety net that can, and should, ensure that people with low incomes can access essential health care without forcing providers to withhold referrals for all of the options available to them,” she said in a statement Monday.

Still, McGill Johnson criticized a feature of the Biden administration’s rule, which would allow “objecting individuals and grantees” to not be required to counsel or refer for abortions in the program.

But Marjorie Dannenfelser, the president of the anti-abortion group Susan B. Anthony List, said in a statement Monday that the Trump rule had respected “the plain statutory language of Title X.”

“Democrats push this agenda at their own political peril,” she said.

More than 20 states filed lawsuits against the Trump administration in hopes of overturning the rule, including California, whose suit was led by Becerra, then the state’s attorney general.

In the spring of 2019, the Trump administration announced that it would give millions in Title X funds to an anti-abortion nonprofit organization funded by allies of the Catholic Church, the Obria Group. Critics cast the move as a way to defund medical clinics that provide abortions.

Announcing the policy reversal Monday, the Biden administration cited last year’s Family Planning Annual Report, which showed a precipitous drop in the number of clients served by the Title X program. The report estimated that roughly two-thirds of the decrease in family planning patients between 2018 and 2020 could be attributed to the Trump rule.

Six states currently have no Title X services, and seven others have “limited Title X capacity,” the Health and Human Services department said.

Monday’s reversal comes as the debate over abortion rights has flared up again on Capitol Hill after the Supreme Court refused last month allowed a Texas law prohibiting most abortions after six weeks of pregnancy to take effect. With other states seeking to enact similar restrictions, and the court, now dominated by conservatives, preparing to take up a case that could overturn the 1973 decision in Roe v. Wade, Democrats are making the issue a centrepiece of their campaign strategy for next year’s midterm elections.