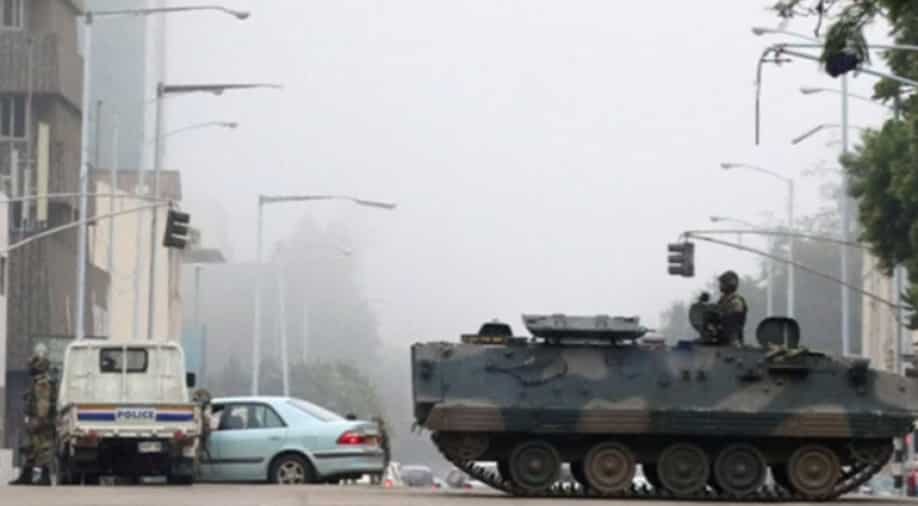 The army has taken control in Zimbabwe including the state TV and detained President Robert Mugabe, the BBC reports

The army has taken control of Zimbabwe and put President Robert Mugabe under house arrest.

President Mugabe's wife Grace has left the country for neighbouring Namibia after reports of the army takeover of the southern African country, media reports said.

The military has, however, clarified that President Mugabe is safe and has denied staging a coup.

Neighbouring South Africa's President Jacob Zuma, one of Mugabe's closest allies, said he had spoken to the veteran leader by telephone.

Mugabe "indicated that he was confined to his home but said that he was fine," the South African government said in a statement that called for calm and restraint.

An army spokesman announced on the nation's broadcasting organization, ZBC, that President Mugabe was safe but did not disclose where he was being detained, the BBC report said.

The Army said it was targeting people close to Mr Mugabe who had caused  "social and economic suffering".

"The president... and his family are safe and sound and their security is guaranteed," Major General Sibusiso Moyo said, reading out a statement.

"We are only targeting criminals around him who are committing crimes... As soon as we have accomplished our mission we expect that the situation will return to normalcy."

"This is not a military takeover of government," Major General Sibusiso Moyo said.

Soldiers and armoured vehicles blocked roads to the main government offices, parliament and the courts in central Harare, a witness told Reuters.

Gunfire was heard near Zimbabwe President Robert Mugabe's house in Harare earlier in the day. Military officers had claimed they were not launching a coup but were "targeting criminals around" the president.

Military vehicles were seen on the streets at Harare, however, the army had denied a coup was underway.

A day earlier, the army had warned that it could intervene over a purge of ruling party officials.

The army's move comes after President Mugabe sacked his deputy, Emmerson Mnangagwa, in favour of his wife, Grace who has been vying to succeed her husband as president. Her succession is strongly opposed by senior ranks in the military.

The main goal of the generals appeared to be preventing Mugabe's wife Grace, 41 years his junior, from succeeding him, Reuters reported.

The Mugabe-led ZANU-PF party had recently accused General Constantino Chiwenga of "treasonable conduct" leading to tensions between the government and army. Speculation has been rife in Harare that Mugabe had sought to remove army chief Chiwenga, who is seen as an ally of ousted Mnangagwa.

Mugabe, 93, has ruled Zimbabwe since independence from Britain in 1980.