Allan Lichtman: The man who has correctly predicted US election since 1984 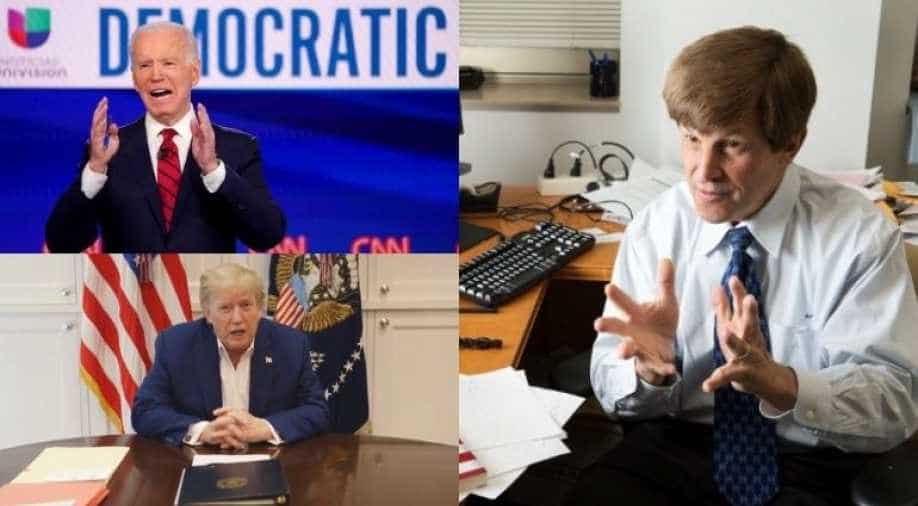 Allan Lichtman: The man who has correctly predicted US election since 1984 Photograph:( Reuters )

Lichtman has never been wrong with his predictions since 1984, and this year he has predicted the winner already

Many have been trying to predict the result of the upcoming US elections, but all eyes are now set on the predictions of one man: Allan Lichtman.

A history professor, Allan Lichtman, is one of those rare experts who has correctly predicted all the US elections since 1984.

This year, the race to the White House is between the current US President Donald Trump and his Democratic rival and former Vice President Joe Biden.

Also read| US election 2020: Trump or Biden? Astrologers predict the next President

Lichtman has created a system called 'The Keys to the White House' — more popularly known as the '13 Keys' model.

This model is a very basic and simple, yet an important way of predicting the election results. Lichtman has devised 13 questions or topics which he answers on True/False basis and thus predicts the next President.

As per this model, if majority questions are answered as true, then the current President gets to keep his room in the White House, and if not then it is time for a new face to represent the superpower.

So many astrologers, numerologists, ecnomic experts, political leaders and many more have been studying, polling and trying to predict who will be winner of the US elections this year.

Have a look| Donald Trump Vs Joe Biden: Which celebrity is backing whom in the US presidential elections

However, Lichtman has given his answer.

As per the expert Historian, this year he observed seven false and six true for the questions in his '13 Keys' model. So, as per the rules of the model — which has never been wrong — Trump will have to pack up his stuff and leave the White House.

Also read| US election 2020: What happens if a US presidential candidate dies before the election

"The secret is keeping your eye on the big picture of incumbent strength and performance. And don't pay any attention to the polls, the pundits, the day-to-day ups and downs of the campaign. And that's what the keys gauge. The big picture," Lichtman defended his prediction in an interview with the American channel CNN.

He also added that one of the biggest reasons for Trump losing to "sleepy Joe" will be the President's poor handling of the novel coronavirus — which he also contracted last week but claims to have recovered.

"He was in pretty good shape going into 2020 and then, as you point out, America was hit with the pandemic, the cries for social and racial justice, and Donald Trump reverted to his 2016 playbook where he was the challenger. But you can't talk your way out of it when it's your record," he told LBC in an interview.

He also added that Trump and the current members of the Republican party have had one of the rare times when a massive fortune of economy and a probable win was reversed within months due to one issue. Lichtman also added that things cannot go back to looking greener within few weeks time for Trump and that will cause his downfall in the upcoming elections that are scheduled for November 03.

However, people are calling US elections 2020 to be one of the most unpredictable elections in the history of the US. So, not everyone is betting on Lichtman's predictions this year. But whether or not Lichtman will be able to continue his 35 years plus strike will be revealed soon.