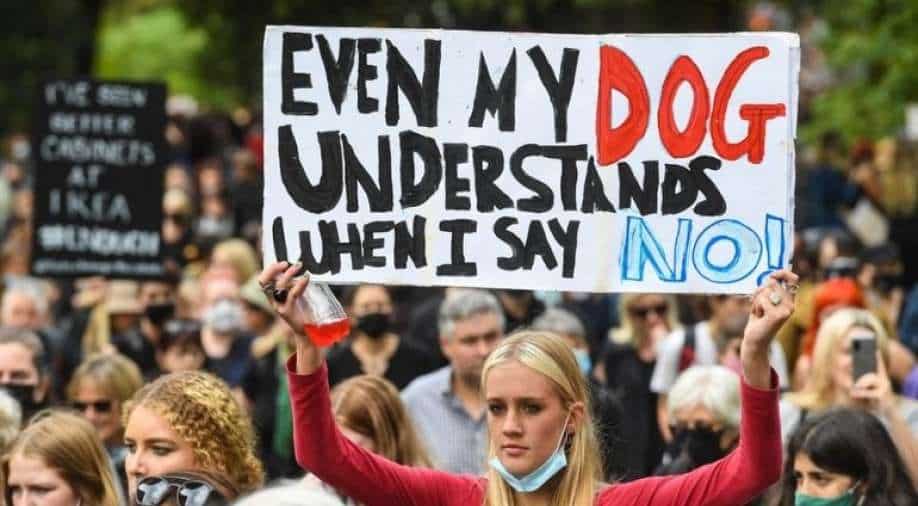 Some protests are responding to recent formal reports of sexual assault. A few are driven by anonymous reports on social media, which fraternities say lack credibility

At the University of Nebraska-Lincoln, hundreds of students protested outside a fraternity house in August after a student reported a sexual assault by one of its members to the police.

At Northwestern University, in Evanston, Illinois, demonstrations erupted Sunday after several students said they had been drugged at two fraternities. Northwestern suspended recruitment and social events at on-campus fraternity houses.

At the University of Massachusetts Amherst, rumours about a sexual assault prompted hundreds of students to show up outside the Theta Chi fraternity house, chanting an expletive, middle fingers raised. Some protesters overturned a car, and two students were arrested.

These protests were just part of a series of similar demonstrations against fraternities that have occurred this fall — not at small liberal arts colleges, but at big universities with powerful fraternity cultures, like Syracuse University in New York and the public universities of Kansas, Iowa and Mississippi.

Some protests are responding to recent formal reports of sexual assault. A few are driven by anonymous reports on social media, which fraternities say lack credibility, and which universities say they must take seriously, given the reluctance of some victims to report an assault.

But many protesters are not fighting what they see as a single case of rape or violence. Nor are many interested in disciplinary measures, doled out case by case.

Rather, many students, feeling newly empowered after the #MeToo movement and the Black Lives Matter protests, say they want an overhaul of campus life.

“A lot of students on campus want to see the fraternity completely abolished,” said Rebecca Evans, a sophomore at the University of Iowa who helps run U for Us, which supports sexual assault victims at the university.

Fraternity officials say they understand the depth of the students’ anger about sexual assault, but that protesters are not seeing the whole picture.

“We have our challenges no doubt, just like the governors of states, just like people who are in media, just like pro athletes, just like entertainment,” said Judson Horras, president and CEO of the North American Interfraternity Conference, the largest trade association of fraternities. He added, “We are being labeled for a problem that is frankly much larger than a fraternity issue.”

Fraternity officials say that while police and university investigations are continuing, their chapters have acted swiftly and decisively. The accused student at the University of Nebraska dropped out of school and is no longer a member of the chapter, according to the Interfraternity Conference.

“So many fraternity men are appalled by this behavior,” Horras said, adding that fraternity brothers who expelled members should be supported and encouraged, not targeted by protests.

“They did the right thing,” Horras said. “The protests should be directed at the behavior.”

Horras said the Interfraternity Conference had taken specific steps to stop sexual misconduct. It requires fraternity members to receive sexual misconduct education, and since the fall of 2019, it has banned the consumption of hard alcohol at fraternity parties and houses.

Fraternity members are told, he said, “You report the incident immediately because we want to have a culture of openness and accountability of individuals.”

But fraternities have impassioned opponents. The protests are in a similar vein to “Abolish Greek Life” movements that have sprung up over the past year at universities like Emory, American and North Carolina. And the entering class of college students seems more intense and unyielding than that of the students who entered just before them, students say.

Sohaila Ammar and Katie Robertson, both first-year students at UMass, used Instagram to build support for demonstrations on their campus after a friend passed on the accusation that a woman had been drugged and sexually assaulted. They think the pent-up energy of the coronavirus pandemic has been transferred to the protests.

“People are conditioned to be, ‘Oh, that’s how it is, that’s college culture,’” Robertson said. “My generation is a lot less tolerant of things that have happened in the past.”

“I feel like we’re a lot more radical even than the juniors and seniors, a lot more bold and forward,” Ammar said.

“Whether it be girls who have experienced sexual assault at a fraternity party or Black Americans with the police, both of these groups have been violently targeted in different ways,” she said. They are not the same, she said, just that, “for a long time, this has been swept under the rug.”

Fraternities point out that they are part of a vibrant campus life — by giving students a sense of belonging on a big campus, by raising donations and helping students in their careers.

While sexual assault on campuses is said to be underreported, research on fraternities and sexual violence is thin. Some data shows that more than a quarter of female undergraduate students — and almost 7 per cent of their male counterparts — will “experience rape or sexual assault through physical force, violence, or incapacitation,” according to the Rape, Abuse and Incest National Network, an advocacy group.

But some research also suggests that violence is more closely tied to alcohol abuse and peer support than to anything intrinsic to belonging to a fraternity.

Recent protests have coincided with the return of the anonymous messaging app Yik Yak in mid-August after it was discontinued four years ago. While the app is popular on college campuses because it is location-based, the anonymity it thrives on does not make it easy for protesters, administrators or police to substantiate any accusation.