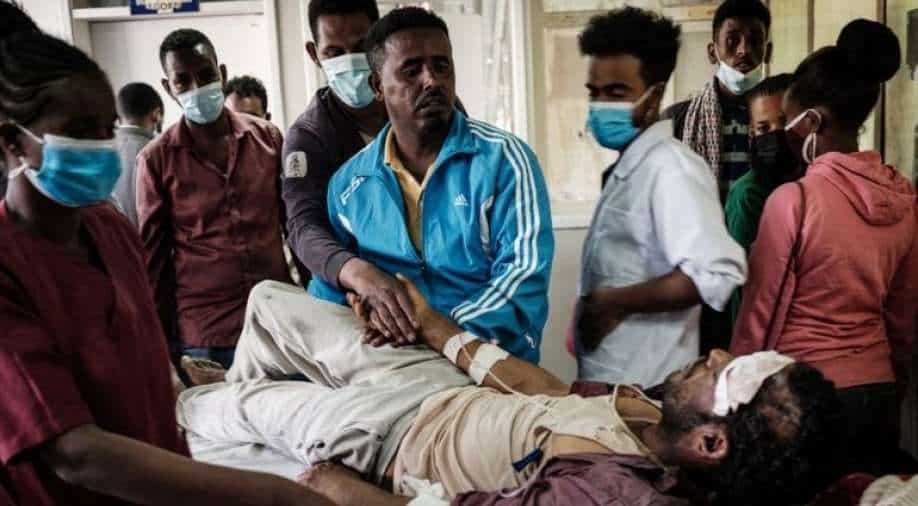 A Togoga injured resident, a village about 20km west of Mekele, where an alleged airstrike hit a market leaving an unknown number of casualties, moves on a stretcher for medical treatments at the Ayder referral hospital in Mekele, the capital of Tigray region, Ethiopia, on June 23, 2021. (AFP Photo) Photograph:( AFP )

The bomb exploded off on Tigray's 33rd Martyrs Day, which commemorates the Hawzen Massacre. Over 1,000 Tigrayans were killed in a market in Hawzen in the massacre that took place near the end of the Ethiopian Civil War.

At least 43 people were killed when an airstrike targeted a market in Ethiopia's war-torn northern district of Tigray.

Two injured survivors of the attack in the small town of Togoga described the incident to the media.

The airstrike took place on Tigray's 33rd Martyrs Day, which commemorates the Hawzen Massacre, which killed over 1,000 Tigrayans in a market in Hawzen near the end of the Ethiopian Civil War.

The bomb hit a market at around 1 pm.

"We didn't see the plane, but we heard it," an eyewitness said. "When the explosion happened, everyone ran out. After a time we came back and were trying to pick up the injured."

Colonel Getnet Adane, an Ethiopian military spokesman, did not confirm or deny the incident. Airstrikes are a standard military technique, according to him, and government forces do not target civilians.

Requests for comments from Prime Minister Abiy Ahmed's spokesperson and the head of a government task team on Tigray were not returned.

The US State Department expressed concern over reports of civilian deaths in the market strike and urged Ethiopian authorities to ensure that all victims receive proper medical attention.

"We also call for an urgent and independent investigation, as well as remedial action, to hold those responsible for this attack accountable," State Department spokesman Ned Price said in a statement.

"We have requested access to the area to assess the situation and see how we can assist," Dujarric said. "The situation in the area remains very, very volatile."

Hundreds of racially motivated attacks against civilians have been reported, including door-to-door executions and systematic rape of Tigrayans by the Eritrean military, according to several investigations.

Ethiopia's government has stated that the Tigray People's Liberation Front, which the government accuses of striking a military command post in 2020, bears sole responsibility for the conflict and resulting suffering in Tigray.

According to the United Nations, tens of thousands of malnourished children are at risk of dying in Ethiopia's conflict-torn Tigray region, which is currently ravaged by famine.