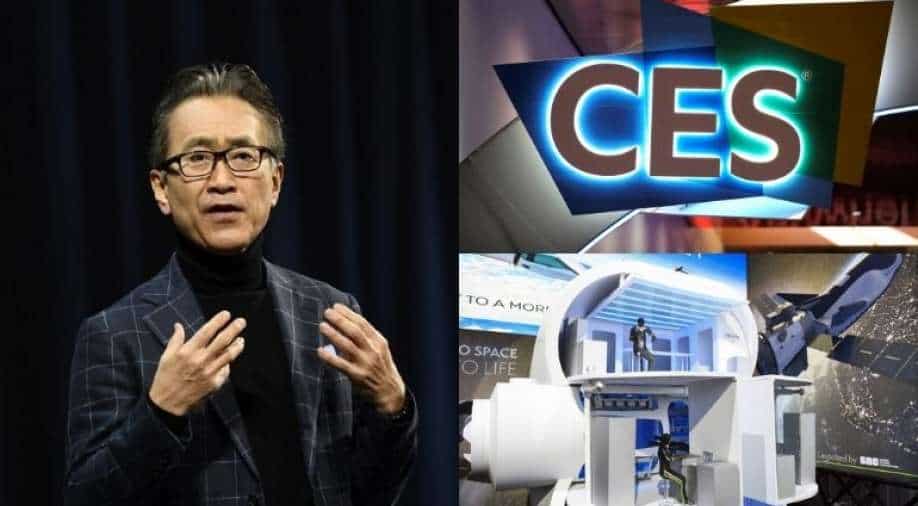 In this combination of images, Sony chief executive officer Kenichiro Yoshida can be seen along with the CES logo and a scale model of the Sierra Space Large Integrated Flexible Environment (LIFE) habitat. Photograph:( Agencies )

In this year's show, only vaccinated people will be granted entrance and they need to wear facemasks for protection against COVID-19

The Consumer Electronics Show has returned with an in-person show amid the surge in Omicron cases across the globe.

Organisers of the tech fair believe that the show still has a lot to offer even though Amazon.com Inc and General Motors Co dropped out of the event.

Known as one of the world's largest trade fairs the show is trying to get back to business in Las Vegas.

Also see | From meatless meat to Web 3.0: Here are the tech trends that can dominate in 2022

"We are thrilled to be back in Las Vegas where we belong after a two year absence for the platform for innovation globally," said Gary Shapiro, the President of the Consumer Technology Association.

"There's a whole plethora of different things, from robotics to Artificial Intelligence to 5G to Non-Fungible Tokens (NFTs), to many other technologies, including food technology, space technology. So many things that we focused on that we haven't before that have changed in just a couple of years," he added.

In this year's show, only vaccinated people will be granted entrance and they need to wear facemasks for protection against COVID-19. Test kits will also be provided at the venue, according to CTA's statement.

"Despite a few well-publicized cancellations amongst our exhibitors, we have over 2,200 exhibitors here at CES 2022 in Las Vegas, and all of them are counting on us to move forward," Steve Koenig, a vice president from the group that runs the convention.

The event has been cut back by a day to end Friday, and the scale of the show will be sharply reduced with fewer than half the roughly 4,500 exhibitors that turned up for the last in-person edition in 2020, just before pandemic lockdowns hit the United States.

As worries over the new variant loom, many companies have withdrawn from presenting in-person at the event, planned both virtually and in-person.

Sony Group's Sony Electronics has said it will have limited staffing and attendees at the event.