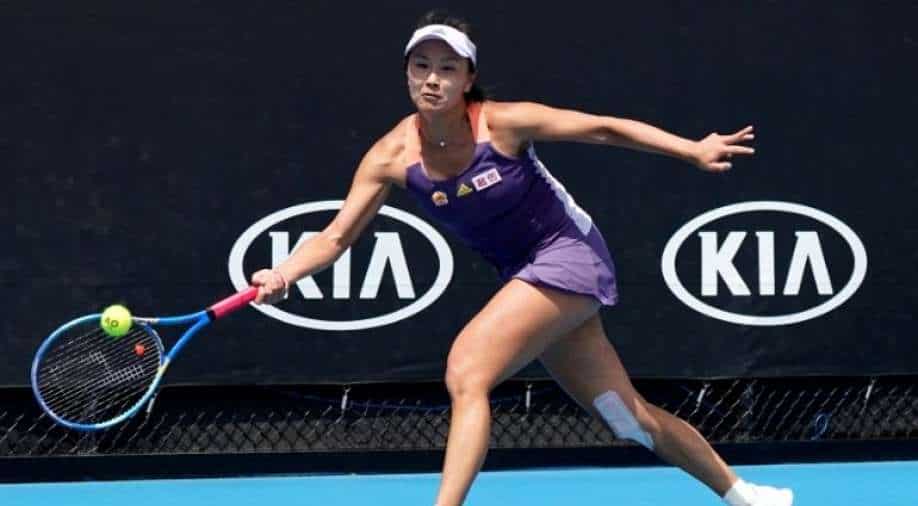 In an editorial, the Global Times newspaper, published by the ruling Communist Party`s People's Daily, said the WTA was betraying the Olympic spirit and bringing politics into tennis.

Beijing took umbrage on Thursday at the suspension of Women's Tennis Association (WTA) tournaments in China in solidarity with Peng Shuai after the player made a sexual assault accusation then disappeared from public view.

Foreign ministry spokesman Wang Wenbin did not directly mention the WTA but pointedly said China "opposes the politicization of sports".

In an editorial, the Global Times newspaper, published by the ruling Communist Party`s People's Daily, said the WTA was betraying the Olympic spirit and bringing politics into tennis.

"Some forces in the West are instigating a boycott against the Beijing 2022 Winter Olympics," it added, referring to the February event which some rights groups want boycotted over China's human rights record.

Peng, a former world No. 1 doubles player, was unseen in public for nearly three weeks after she posted a message on social media in early November accusing China's former Vice-Premier Zhang Gaoli of forcing her into sex.

Neither Zhang, who retired in 2018, nor the government have commented on Peng's accusation and the topic has been blocked on China`s heavily censored internet.

The men's equivalent body, the Association of Tennis Professionals (ATP), weighed in on Thursday saying Peng's situation raised serious concerns within and beyond the sport.

"The response to those concerns has so far fallen short. We again urge for a line of open direct communication between the player and the WTA in order to establish a clearer picture of her situation," said ATP Chairman Andrea Gaudenzi.

Peng, a three-time Olympian, did appear in mid-November at a dinner with friends and a children's tennis tournament in Beijing, photographs and videos published by Chinese state media and by the tournament's organisers showed.

And the International Olympic Committee (IOC) said it had held a second video call with the 35-year-old player on Wednesday following one late last month.

The IOC said it had offered her support, would stay in regular touch, and had agreed a personal meeting in January. She appeared to be "safe and well, given the difficult situation she is in", it added in its statement on Thursday.

Unconvinced, however, the U.S.-headquartered WTA wants further assurances of her wellbeing and an investigation before it returns to the lucrative Chinese market.

"While we now know where Peng is, I have serious doubts that she is free, safe, and not subject to censorship, coercion, and intimidation," chief executive Steve Simon said on Wednesday, suggesting she was pressured to retract her allegation.

Equality for women would suffer a setback if powerful people could suppress accusations of assault, he added. "I am also greatly concerned about the risks that all of our players and staff could face if we were to hold events in China in 2022."

Simon told CNN on Thursday that he had received an email from Peng but said he thought it was "100% orchestrated" and did not reflect her "true position."

From former women's greats Billie Jean King and Martina Navratilova to men's No. 1 Novak Djokovic, many in the tennis world applauded the WTA, which stands to lose hundreds of millions of dollars in TV and sponsorship revenue.

The WTA had been fast expanding into China, where local interest was fuelled when Li Na won the 2011 French Open.

China hosted just two WTA events in 2008 but 11 years later was staging nine - including the WTA Tour finals - though the pandemic forced the cancellation of all but one this year and last.

Another major global tennis body, the International Tennis Federation, also said it stood with women`s rights and that Peng`s allegations must be addressed.

Peng posted in early November that Gaoli had coerced her into sex and they later had an on-off consensual relationship. The message was deleted half an hour later.

Sexual harassment and assault were for years rarely broached in public in China until a #MeToo movement began in 2018, when a student accused her professor of sexual harassment.