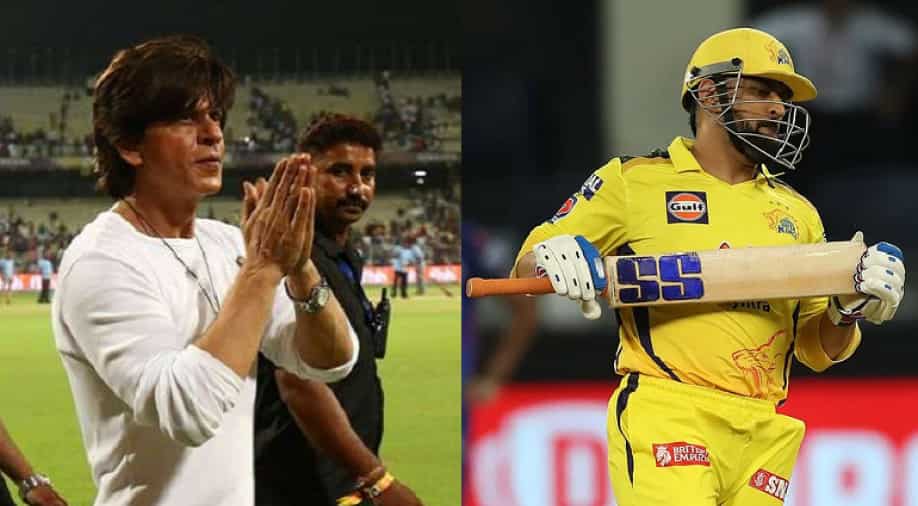 SRK had said he is ready to sell off his pants to buy MS Dhoni for KKR In IPL auction. | Photo - IPL | Photograph:( Others )

Kolkata Knight Riders (KKR) co-owner Shah Rukh Khan had once said he would love to have MS Dhoni play for his franchise in the IPL and is even ready to sell his pants to get the CSK captain in his team.

MS Dhoni is a name synonymous with Chennai Super Kings (CSK)'s success in the Indian Premier League (IPL). The CSK skipper has played an instrumental role in the Men in Yellow's success in the competition over the years and is one of the greatest captains to have led in the IPL. Dhoni has led CSK to a staggering nine finals and four IPL titles in just twelve seasons in the IPL.

While he is one of the most successful captains in IPL history, Dhoni is also arguably one of the most loved cricketers across the globe. He remains the only captain in international cricket to have won all three major ICC trophies - ICC T20 World Cup (2007), ICC ODI World Cup (2011) and ICC Champions Trophy in 2013. He is one of the greatest ever to have played for the country and took India to greater hieghts under his leadership.

Every IPL team owner dreams of a captain like Dhoni for his franchise, however, the CSK skipper was available in the player auction only once. It was in 2008, ahead of the start of the inaugural season that Dhoni had gone under the hammer and was roped in by CSK for $1.5 million - the highest amount for any player at the time. Dhoni has since never entered the IPL auction.

He played for now-defunct Rising Pune Supergiant for two seasons in 2016 and 2017 when CSK were suspended for two years from the league. One of the best captains of all time, Dhoni's value to CSK can be adjudged by the fact that Kolkata Knight Riders (KKR) co-owner Shah Rukh Khan had once offered to even sell off his pants to buy him at the IPL player auction.

It was ahead of the IPL auction in 2018 when Dhoni was set to return to CSK after playing for Pune for two seasons when Bollywood superstar Shah Rukh Khan said he is keen to have Dhoni play for KKR in the IPL even if it meant he had to sell his pyjamas to get him.

"Yaar main toh usko apna pajama bech ke bhi kharid lun, wo aaye toh auction mein. (Brother, I can even sell my pants to buy Dhoni. He has to come for the auction for that)," SRK was quoted as saying by Sportswallah back then.

As it turned out, Dhoni returned to CSK in 2018 and led them to a memorable IPL triumph the same year. He was fabulous as a captain and even better with the bat as the CSK skipper scored 455 runs in 16 matches at a strike rate of over 150 to inspire the team to their third title.

CSK once again made it to the final next year and lost the summit clash by jut 1 run against Mumbai Indians to miss out on their 4th title. The Men in Yellow failed to qualify for the playoffs in IPL 2020 with many writing them off ahead of the 2021 season. However, Dhoni once again proved why he is one of the best captains of all time as he led CSK to their fourth IPL crown this year.

Dhoni has once again been retained by CSK ahead of the new IPL season in 2022 and will be leading the Men in Yellow for another season. He had retired from international cricket in 2020 but continues to ply his trade in the IPL for CSK.