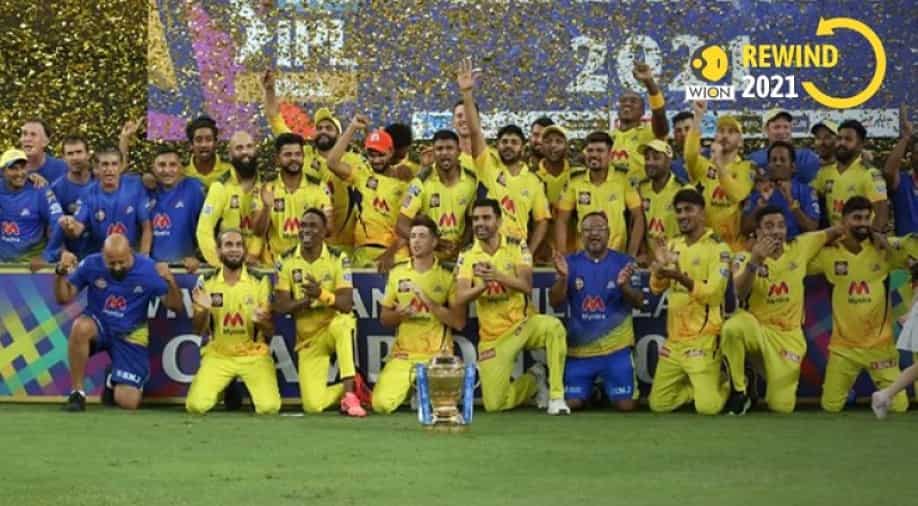 CSK scripted a fairytale comeback in IPL 2021 to bag their fourth title. | Photo - IPL | Photograph:( Others )

After finishing seventh in the previous season, MS Dhoni-led Chennai Super Kings scripted a fairytale comeback in IPL 2021 to lift their fourth title and shunned their critics in style. Here is a look back at their incredible journey to their memorable IPL triumph in the UAE this year.

2021 was an incredible year for MS Dhoni-led Chennai Super Kings (CSK) as the Men in Yellow rose from the ashes to bag their fourth Indian Premier League (IPL) crown in the UAE. CSK had finished seventh in IPL 2020 but scripted a fairytale comeback this year to be standing where they deservingly belonged at the end of a magnificent campaign.

The year gone by was filled with enthralling sporting action across the globe. IPL - the biggest T20 league in the world also lived up to the expectations as it was another season full of high-intensity action and drama. CSK, who had been written off by many at the start of the season after a disappointing seventh-place finish in the previous season, once again proved why they are one of the most successful franchises in the history of the competition.

It was nothing less than an extraordinary comeback from CSK, who have been infamously mocked as the 'Dad's army' due to the presence of a number of players in their squad who were on the wrong side of their 30s. Nonetheless, CSK once again defied all the odds to claim their fourth IPL title and shut their critics in style.

Here is a look back at Chennai Super Kings's fairytale comeback in IPL 2021:

Nothing seemed to be going right for CSK in IPL 2020 as it proved to be a disastrous season for MS Dhoni and his men. Having reached back-to-back finals in IPL 2018 and 2019, expectations were high but the fatigue finally seemed to have caught up with the dad's army, who failed to qualify for the playoffs in IPL 2020.

CSK's batting line-up crumbled under pressure on several occasions as the likes of Kedar Jadhav, skipper Dhoni and others struggled to deliver. The absence of Suresh Raina in the middle-order was also felt as CSK's scoring rate dropped massively. The team managed only six wins in 14 games and finished seventh on the points table.

It was the first time in CSK's history that Dhoni's men had failed to make it to the top four. Major changes were expected as all eyes were on CSK in the upcoming auction following the conclusion of the season. Many believed CSK needed a complete revamp of their ageing squad but Dhoni was ready with another surprise from his bag of tricks.

When many were expecting a major overhaul and a number of players to be released by CSK ahead of the player auction, Dhoni & Co. surprisingly let go of only six players, including Shane Watson, who himself announced his retirement from all forms of cricket.

CSK then made their first move by roping in experienced Indian batter Robin Uthappa on a trade deal from Rajasthan Royals. Despite Uthappa's performances being average in the previous season, Dhoni and the CSK management showcased their faith in the veteran batter.

CSK then went on to buy only three players to replace the six released players in the auction. Dhoni, whose love for all-rounders has been well-documented, got CSK to get hold of two quality all-rounders for the squad. CSK roped in Moeen Ali and Krishnappa Gowtham while also roping in Cheteshwar Pujara as a backup batter.

CSK's critics were not convinced yet and were expecting more from the franchise at the auction. However, they would later be proved wrong by none other than Dhoni, who didn't even need all three players bought in the auction to be a regular in his playing XI and was content with only Moeen Ali playing an important role for the team in the next season.

CSK lost their opening encounter against last season's finalists Delhi Capitals by seven wickets which left many convinced it was going to be yet another shambolic season for Dhoni & Co. However, CSK went on an unbeaten streak of five matches next and almost made it six wins in six games against arch-rivals Mumbai Indians before going down fighting.

While the opening duo of Faf du Plessis and Ruturaj Gaikwad was going all guns blazing, Moeen Ali's inclusion in the playing XI provided CSK the much-needed balance. Raina's return meant, they now had a more dependable middle-order with the likes of Sam Curran, Ravindra Jadeja and Dwayne Bravo getting the license to take on bowlers.

The first team to qualify for the playoffs

IPL 2021 had to be suspended midway through the season due to a COVID-19 outbreak in the camps of several teams. It was later announced that the second leg of the tournament will be staged in the UAE. Once again questions were asked about CSK's chances of continuing their magnificent run in the UAE after what had unfolded in IPL 2020.

However, Dhoni's men once again proved their critics wrong to carry on from where they had left in the first leg. CSK went on to become the first team to qualify for the playoffs and defeated the Delhi Capitals in Qualifier 1 to become the first finalists of the season.

Gaikwad and Du Plessis continued their purple patch in the final and delivered another brilliant match-winning stand against Kolkata Knight Riders in the summit clash. The duo added 61 runs for the first wicket after CSK were asked to bowl first by KKR skipper Eoin Morgan.

After Gaikwad's dismissal on 32 off 27 balls, Du Plessis continued his heroic run and slammed 86 off just 59 balls laced with seven fours and three sixes. Robin Uthappa (31) and Moeen Ali (37) also made crucial contributions to power the Yellow Army to a big total of 192 runs.

KKR seemed in control of the game for the first ten overs of their run-chase. They were clear favourites at one stage after openers Venkatesh Iyer (50) and Shubman Gill (50) put on 91 runs for the first wicket. However, CSK bowlers made a remarkable comeback in the contest and ripped through KKR's batting line-up to restrict them to just 165/9 in 20 overs.

Shardul Thakur returned with three wickets and was the pick of the bowlers despite going for runs, while Josh Hazlewood and Ravindra Jadeja picked up two wickets apiece. CSK won the final convincingly by 27 runs to lift the IPL 2021 trophy.

CSK have played a remarkable nine finals - most by any team, in a total of twelve seasons in IPL history and have won four titles. Dhoni & Co. are the true comeback kings of the competition and should never be written off.