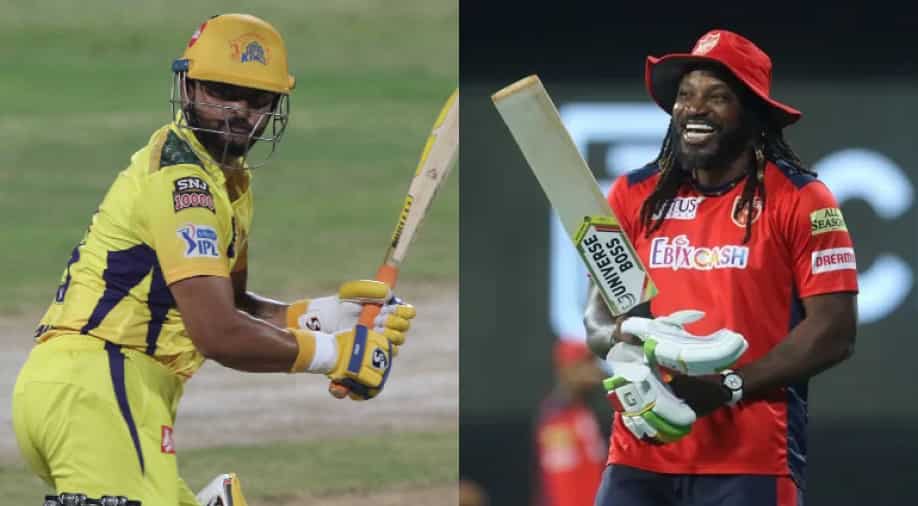 Suresh Raina and Chris Gayle are among the IPL veterans who might go unsold in mega auction. | Photo - IPL | Photograph:( Others )

Ahead of the Indian Premier League (IPL) mega auction, here is a look at five league veterans who might go unsold in the upcoming mega auction.

The Indian Premier League (IPL) is all set to witness a mega auction ahead of the new season with ten teams looking to build their squads almost from scratch. While the existing eight teams have already revealed the list of retained players, the two new franchises - Ahmedabad and Lucknow have a chance to pick three players each from the pool of non-retained ones.

The mega auction is all set to feature a host of Indian and overseas superstars who will be in demand considering the increase in the number of teams from eight to ten. While some of the stars released by their respective franchises might be bought back, some may find new teams in the mega auction.

Suresh Raina is a bonafide legend in the Indian Premier League. He has been part of the league right from the inception of the tournament in 2008 and has played an integral role in Chennai Super Kings (CSK)'s success over the years. Raina is the fourth-highest run-getter in the history of IPL with 5528 runs in 205 matches but is no more the player he once was.

The 35-year-old, who retired from international cricket last year, has struggled in the IPL over the last few seasons and has failed to churn out runs consistently. He was released by CSK ahead of the mega auction this year and might go unsold if the four-time champions decide not to buy him back.

Another IPL great who is in the final lap of his cricketing career, Chris Gayle might remain unsold at the IPL mega auction ahead of the 2022 season. The legendary batter is regarded as one of the greatest of all times in T20 cricket and has been entertaining his fans with his exploits in the IPL over the years.

The power-hitter was once a nightmare to face for the best of bowlers in the world but his waning prowess with the willow over the last few years has seen him fail to make an impact in the IPL. Gayle, who has 4965 runs in 142 matches, was picked at the last minute by Punjab Kings in the 2018 player auction after going unsold twice. He might not be picked by any team this time around.

Former Rajasthan Royals captain Ajinkya Rahane played only eleven matches for Delhi Capitals in the last two seasons since joining the franchise from RR. An IPL veteran, Rahane too has been part of the league since its inception in 2008 and has a great record.

However, he is no longer a regular for India in white-ball cricket and plas only Test cricket at the international level. He has also struggled to score runs in IPL over the last couple of seasons with just 121 runs in 11 games at a strike rate of just above 100. Rahane might go unsold at the IPL mega auction ahead of the new season considering his lean patch in Tests as well of late.

Dinesh Karthik is one of the few players to have already played over 200 matches in the IPL. He had led KKR in the 2018 and 2019 seasons before handing over the captaincy to Eoin Morgan midway through the 2020 edition. Karthik's form in the tournament has been concerning as he has failed to attain consistency.

In the last two seasons, he has 169 and 223 runs to his name in 14 and 17 matches respectively. Karthik has been released by KKR and might not find a buyer at the IPL mega auction.

Piyush Chawla is one of the most successful bowlers in the history of IPL. He is the fourth-highest wicket-taker of all time in IPL with 157 wickets in 165 matches. Chawla has been part of KKR's title triumphs in the 2012 and 2014 seasons but with growing age, he has seen a massive drop in his performance levels.

The spinner was part of the Mumbai Indians squad in IPL 2021 and managed to make only a solitary appearance. He finished the season with just one wicket to his name. In the last two seasons, Chawla has played just 8 matches in the PL and has seven wickets to his name. He is one of the IPL veterans who might go unsold in the upcoming mega auction.