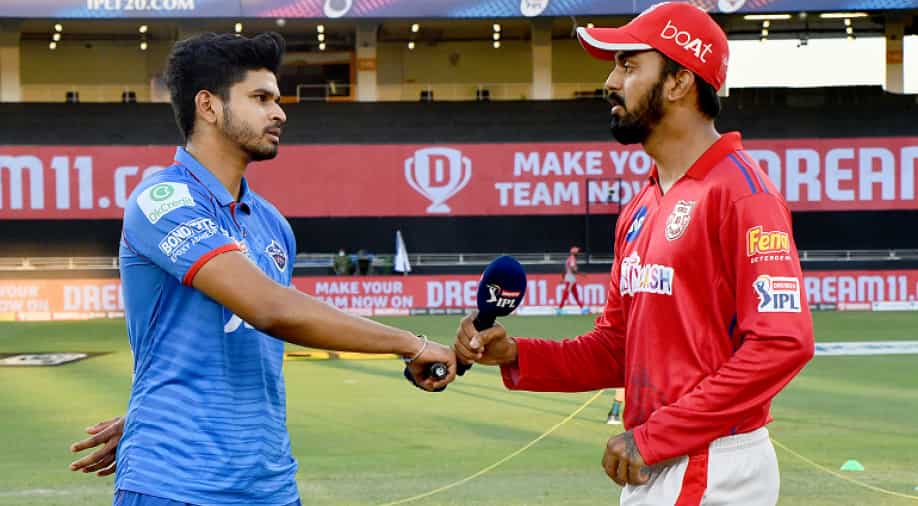 Shreyas Iyer and KL Rahul can be great contenders for captaincy for two new IPL teams. | Photo - IPL | Photograph:( Others )

The likes of KL Rahul and Shreyas Iyer among others will be on the radar of the two new teams to take up captaincy roles at the franchise ahead of IPL 2022.

The Indian Premier League (IPL) is all set to become a ten-team tournament from the 2022 season with the inclusion of two new teams - Lucknow and Ahmedabad. While the existing eight IPL teams have already revealed the list of retained players ahead of the mega auction which is set to take place before the start of the new season, Lucknow and Ahmedabad have been given the right to pick three players each from the pool of non-retained players.

While both Lucknow and Ahmedabad IPL franchises will be looking to pick quality players from the pool of the non-retained ones ahead of the mega auction, they would also be looking to secure the signing of their respective captains. Both Ahmedabad and Lucknow franchises will be on the lookout for captaincy candidates who can be picked before the mega auction to build the team around them.

A number of top Indian and overseas players have been let go of by their respective franchises who can become the future leaders of the two new IPL teams. The likes of KL Rahul and Shreyas Iyer among others will be on the radar of not just the two new teams but several others, who will be looking to get a new captain ahead of the new season.

Here is a look at 5 potential captaincy candidates for two new IPL teams:

KL Rahul is one of the favourites to take over as the captain of the Lucknow IPL team and is reportedly in negotiations with the franchise after leaving Punjab Kings. Rahul has been reportedly offered a staggering deal of Rs 20 crore (INR 200 million) per year to join the Lucknow team ahead of the new season.

One of the best Indian batters in the IPL over the last few years, Rahul led Punjab for two seasons in 2020 and 2021. While he was consistent with the bat on the personal front, Rahul failed to inspire his side to playoffs in both seasons. Nonetheless, he has been one of the best batters in the league for the last few years and is a great captaincy prospect for both the new teams.

Another Indian star, who has the experience of captaining an IPL team, Shreyas Iyer will also be on the radar of the two new teams for the captaincy role. Iyer left Delhi Capitals in search of a leadership role after leading the franchise for two and a half seasons. Iyer helped DC make it to their first final in 2020 and was exceptional as a leader.

His stature in the IPL has grown over the years and it won't be a surprise if an IPL team ropes him in as their new skipper. Iyer has plenty of experience behind his back having played 87 matches in IPL. He has 2375 runs to his name at an average of over 31.

One of the best overseas batters in the league over the years, David Warner was released by his former team Sunrisers Hyderabad after a fallout during IPL 2021. Warner was sacked from captaincy midway through the IPL 2021 before being dropped from the playing XI by SRH. He remains the only captain to have led SRH to an IPL title in 2016 and will be a strong captaincy contender for both the new teams as well as some other franchises.

While he has a plethora of experience as a captain, Warner has been a consistent performer as a batter in the IPL. He has the highest runs among the overseas batters in the history of the league and fifth overall with 5449 runs in 150 games at a stunning average of over 41.

Steve Smith has not had great campaigns in the IPL in the last few years but he remains an experienced leader who is capable of taking over the captaincy role for a top IPL side considering his experience and pedigree. Smith has led Rising Pune Supergiant and Rajasthan Royals in the past.

He had led Rising Pune Supergiant to their maiden final in the 2017 season where they lost against Mumbai Indians just by 1 run. Smith has been part of the IPL since 2012 and the former Australia skipper can be a great leader for any team. He has 2485 runs to his name in 103 IPL matches at an average of over 34.

Ben Stokes managed to play just one game for Rajasthan Royals in IPL 2021 as he injured his finger in the opening game of the season before flying back home. One of the best all-rounders in the world at present, Stokes has been released by Rajasthan Royals ahead of the mega auction and can trigger a bidding war at the auction table.

He is also an ideal candidate for captaincy with the kind of experience he possesses. Stokes is a crucial player for England across formats and has been amazing as an all-rounder. He has 920 runs and 28 wickets to his name in 43 IPL matches.