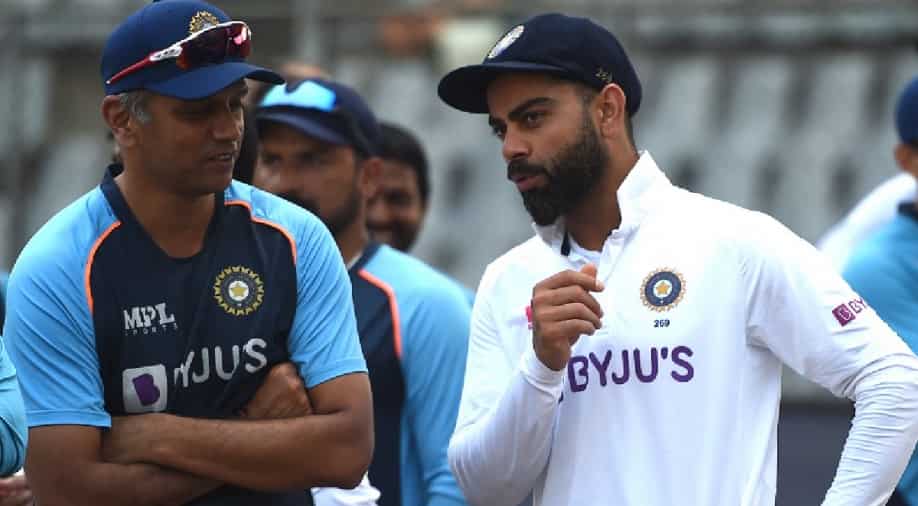 Virat Kohli will speak to Rahul Dravid about taking a break from cricket. Photograph:( AFP )

Virat Kohli has hinted at taking a break from international cricket amid his ongoing poor patch in the ongoing IPL 2022. Kohli said he will be speaking about his break with India head coach Rahul Dravid and team management.

Former India captain Virat Kohli has hinted at taking a break from international cricket post the conclusion of the ongoing season of the Indian Premier League (IPL) 2022. Kohli was expected to deliver with the bat consistently this season after stepping down as the captain of the Royal Challengers Bangalore (RCB).

However, his struggles with the bat continued this season as Kohli found it difficult to get going even after being promoted to open the batting. Amid his rough patch with the willow, many former cricketers and experts, including former India head coach Ravi Shastri has suggested Kohli should take a break to revitalise and bounce back strongly.

Kohli recently opened up on the prospects of taking a break from the game and hinted that he is open to the idea but will have to first speak to India head coach Rahul Dravid and the team management to decide the way going forward. On Shastri's suggestion, Kohli said the former India head coach spoke about the break as he has closely seen Kohli play consistently for a number of years without taking adequate rest.

“There’s one person precisely who has mentioned it which is Ravi bhai and that’s because he has seen from close quarters over the last six-seven years the reality of the situation that I have been in. The amount of cricket that I have played and the ups and downs and the toll that it takes on you to play three formats of the game plus the IPL for 10-11 years non-stop with the seven years of captaincy in between,” Kohli told Star Sports.

Also Read: MS Dhoni confirms participation in IPL 2023, says 'will be unfair to not say thank you to Chennai'

Kohli stressed the importance of rejuvenating himself with a break and said it will be a healthy decision but the timing of it will be important for both him and the Indian cricket team.

“So to take a break and when to take a break is obviously something that I need to take a call on, but it is only a healthy decision for anyone to take some time off and just rejuvenate yourself mentally and physically," said the superstar batter.

Kohli is likely to be rested for India's upcoming T20I series against South Africa at home. The former India captain said he will be speaking to head coach Dravid and the team management before taking a call on enjoying a break from the game.

“It’s only a matter of creating a balance and finding that balance which is right for you as an individual moving forward and I will definitely discuss this with all the people involved – Rahul bhai, the Indian team management – everyone to chart out whatever is best for myself and for the team definitely," said Kohli.