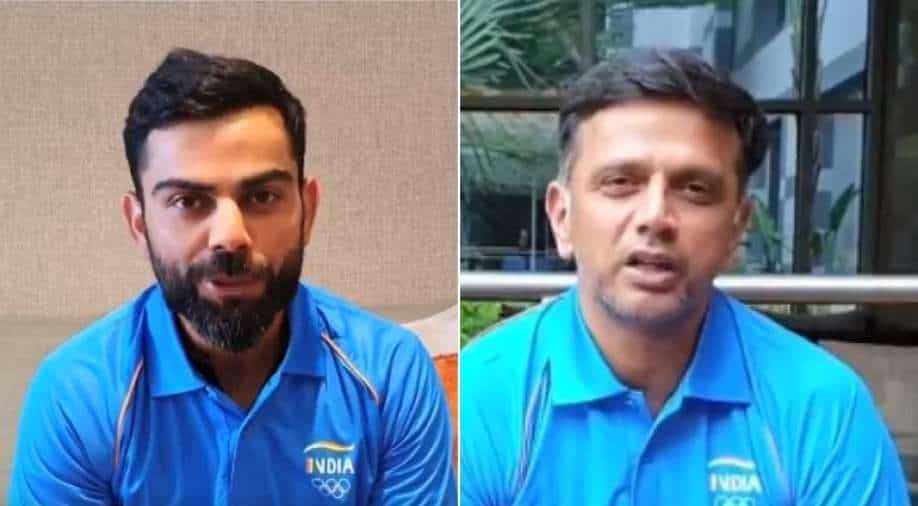 BCCI shared Dravid's pre-recorded message. He said, "Let's come together in cheering for our Indian contingent at the Olympics. Let's cheer for India."

The skipper of the Indian cricket team Virat Kohli has a special message to all the Indian athletes at the ongoing Tokyo Olympics 2020. Kohli's recorded message was shared by the official handle of BCCI, with the hashtag #Cheer4India in support of the Indian contingent. He particularly praised Olympic silver medalist Mirabai Chanu, who emerged as an inspiration for everyone.

Also Read: 'Heading back': Mirabai Chanu set to return to India after a memorable Olympics

Apart from the skipper, Rahul Dravid, the former cricketer and head coach of the Sri Lanka tour, has also extended his best wishes to the athletes. In another post, BCCI shared Dravid's pre-recorded message. He said, "Let's come together in cheering for our Indian contingent at the Olympics. Let's cheer for India."

Rahul Dravid - batting legend & #TeamIndia's Head Coach for the Sri Lanka series - is cheering for our athletes at @Tokyo2020. 👍 👍

So far, Mirabai Chanu's silver remains the only medal in the Indian tally after she finished second in the women's 49kg weightlifting event. The 26-year-old managed a total lift of 202 kgs (87kgs in snatch + 115 kgs in clean and jerk) to claim the silver medal. She finished behind the Olympic champion Hou Zhihui of China, who set an Olympic record with a lift of 210 kgs (94+116). Indonesia’s Aisah Windy Cantika took the bronze medal with an effort of 194kg (84+110).

Chanu victory was monumental as it came two decades after Karnam Malleswari became the first Indian woman to win an Olympic medal (Bronze) while competing at the 2000 Sydney Games in the women’s 69kg weight category.

Recently, Rohit Sharma, who is currently with the Indian squad that will face England in the five-match Test series which commences on August 04, also wished the Indian team also wished India at the Tokyo Olympics. Cricketers Ajinkya Rahane and Shubman Gill also send their best wishes.

.@RealShubmanGill shows his support for our athletes at @Tokyo2020. 👏 👏