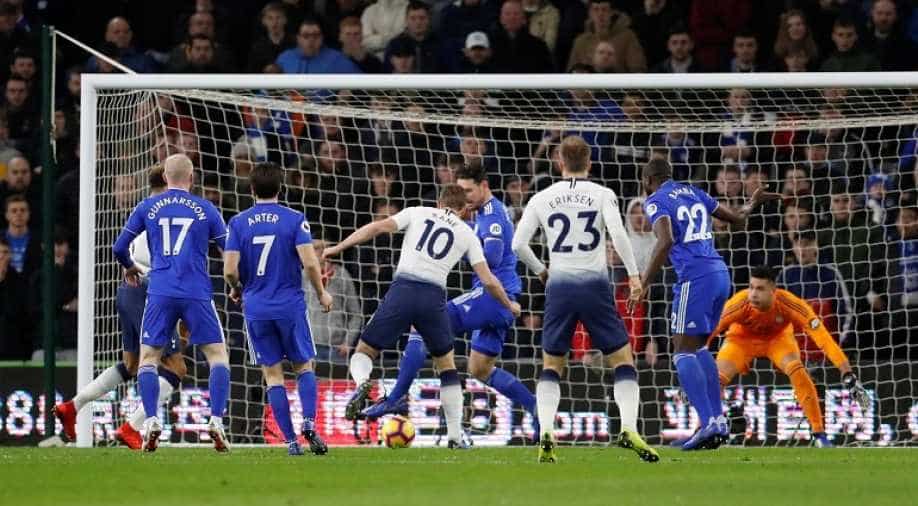 Spurs, beaten by Wolves at home on Saturday, took just three minutes to get in front in South Wales through the familiar source of captain Harry Kane.

Tottenham moved back into second place in the Premier League, six points behind leaders Liverpool, after cruising to a 3-0 win at lowly Cardiff City on Tuesday.

Liverpool face third-placed Manchester City on Thursday night, and City could move back above Spurs if they avoid defeat at the Etihad Stadium.

Spurs, beaten by Wolves at home on Saturday, took just three minutes to get in front in South Wales through the familiar source of captain Harry Kane.

After Kane launched an attack, surging from deep, Kieran Trippier crossed and the England forward had a simple tap-in when the ball ricocheted off Cardiff defender Sean Morrison.

Cardiff manager Neil Warnock said that early goal was a heavy blow: "When we start off like that we shoot ourselves in the foot. All the planning goes out of the window," he told the BBC.

Christian Eriksen then made it 2-0 for Spurs nine minutes later with a clever finish from the edge of the box, although Warnock will be disappointed with the way his defenders backed off and gave the Dane space to wriggle and shoot home.

The game was effectively over in the 26th minute when Son Heung-Min produced a clinical finish with a shot on the turn after being well set-up by Kane. The South Korean has scored 11 goals in his last 12 starts.

Spurs boss Mauricio Pochettino praised the way his side seized control of the game early.

"I don't want to see the table. Of course we are in a good position. We need to be consistent. You must be consistent during the whole season," he said.

Pochettino added that he wouldn't let nervousness over the table prevent him from watching Thursday's clash between City and Liverpool, the league's highest-scoring sides.

"I don't care. Of course I will watch, it will be an unbelievable game and I enjoy football," he said.

For his part Warnock suggested that Cardiff, who remain in 16th place three points above the relegation zone, may need to go shopping during the January transfer window.

"Hopefully we can get one or two additions which will help," he said.