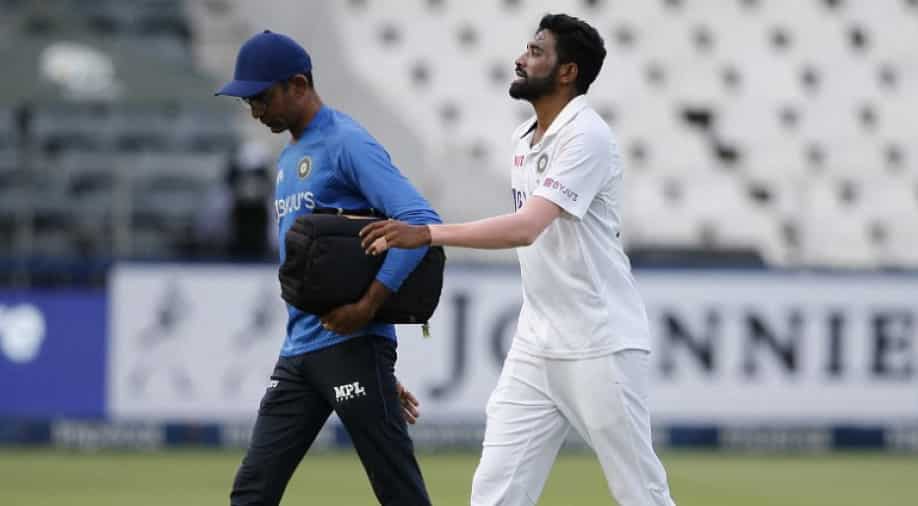 Mohammed Siraj pulled his hamstring during Day 1 of the second Test. Photograph:( AFP )

Senior India off-spinner R Ashwin provided an update on pacer Mohammed Siraj's injury after the end of Day 1's play of the onging second Test between India and South Africa at The Wanderers in Johannesburg. Ashwin revealed the medical team is currently assessing the fast bowler's injury it remains uncertain whether he will take the field on Day 2 or not.

Siraj pulled his hamstring while bowling the final delivery of the fourth over during South Africa's first innings in Johannesburg. He was seen in immense pain and looked in discomfort during his bowling run-up. He was immediately attended to by the physio on the field before hobbling off the ground.

Siraj's injury will be assessed overnight to determine if he will be fit to bowl on Day 2. Ashwin is hopeful of Siraj recovering quickly from the hamstring injury and giving his best for the visitors.

"I asked before going if I could talk about it. Medical staff are assessing him overnight. I am hoping with the history of Siraj that he can come out and give his best," Ashwin told reporters post stumps on Day 1.

India were bundled out for 202 runs in their first innings as the middle-order failed to dliver yet again with the likes of Ajinkya Rahane (0) and Cheteshwar Pujara (3) disappointing. Captain KL Rahul led from the front in Virat Kohli's absence with a gritty 50 off 133 balls.

R Ashwin also played a crucial knock of 46 runs off 50 balls to help India post 202 runs on the board. In reply, South Africa lost just one wicket as they managed to reach 35/1 at stumps on Day 1. The Proteas lost Aiden Markram cheaply on 7 off 12 balls while captain Dean Elgar and Keegan Petersen remained unbeaten on 11 and 14 respectively.

India will be looking to bowl out South Africa quickly on Day 2 to ensure the hosts do not gain a major lead in their first innings.