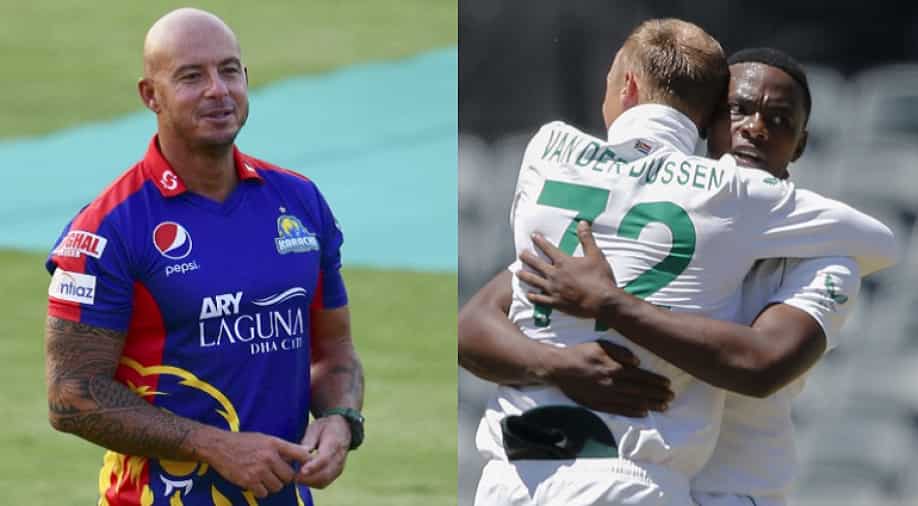 Former South Africa star Herschelle Gibbs took a brutal dig at South African fast bowlers for their poor start on Day 1 of the second Test against India in Johannesburg on Monday.

Kagiso Rabada and Duanne Olivier opened the bowling for South Africa as India won the toss and opted to bat first in the game. Rabada and Olivier failed to trouble the Indian openers - KL Rahul and Mayank Agarwal at the start of the visitors' innings before Marco Jansen got rid of Mayank Agarwal on 26 off 37 balls.

Gibbs took to Twitter to take a dig at the South African pacers, stating how they were even failing to clock 135km on average while commentator Pommie Mbangwa was stressing on air for the South Africans to build pressure on the Indian batters.

"Both opening bowlers for proteas not even hitting 135km on average and Pommy talking about imposing yourself," Gibbs wrote in a tweet.

While South African pacers didn't get off to a good start, they bounced back brilliantly in the latter part of the day. After Agarwal's departure on 26 off 37 balls, India lost Cheteshwar Pujara (3) and Ajinkya Rahane (0) in quick succession while Hanuma Vihari (17) and Rishabh Pant (17) were also dismissed cheaply.

R Ashwin slammed a crucial knock of 46 runs off 50 balls to help India cross the 200-run mark and post a total of 202 runs on the board. South Africa lost opener Aiden Markram cheaply on 7 runs before Dean Elgar (11) and Keegan Petersen (14) added an unbeaten 21 runs for the second wicket.