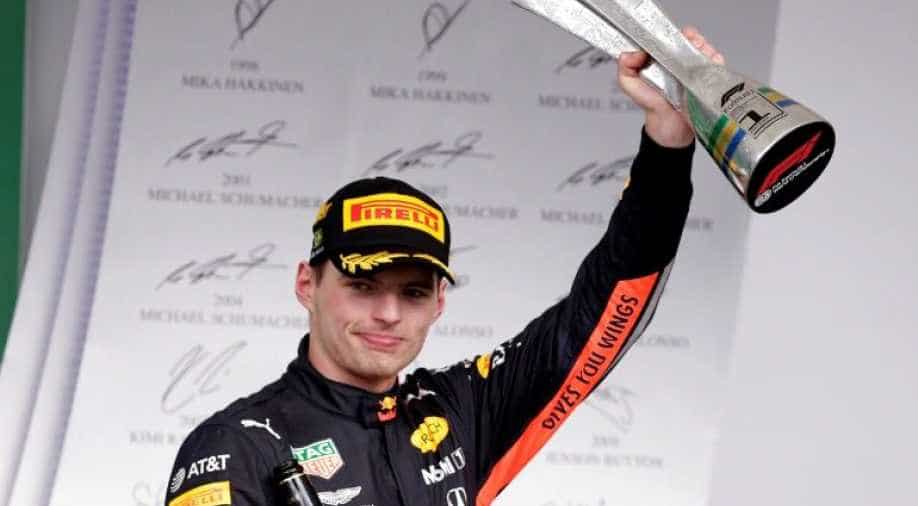 Hamilton chased the Frenchman across the line for third but was handed a five-second penalty for tangling with Red Bull's Alex Albon in a frantic finale to the season's penultimate round.

Max Verstappen won a thrilling Brazilian Formula One Grand Prix for Red Bull on Sunday after the Ferraris collided and Mercedes' six-times world champion Lewis Hamilton was demoted from third to seventh.

Hamilton chased the Frenchman across the line for third but was handed a five-second penalty for tangling with Red Bull's Alex Albon in a frantic finale to the season's penultimate round.

"I fully accept responsibility," said Hamilton, who also collected two penalty points and apologised to Albon for costing the rookie a likely first podium and Red Bull a one-two.

The Thai, who replaced Gasly at Red Bull in a seat switch last August, finished 14th after being sent spinning in the penultimate lap collision.

Both titles had already been won by Mercedes for an unprecedented sixth year in a row, with Hamilton securing his sixth in Texas two weeks ago.

Verstappen started from pole position, only the second of his career, but had to twice overtake Hamilton and avoid a near pitlane collision with Williams' Robert Kubica in a race he otherwise controlled.

The win was the eighth of his career, third of the season but first from pole.

It also made amends for last year's race at Interlagos where he was heading for victory before a coming together with French backmarker Esteban Ocon dropped him to second.

"The way we fought for it was even better," replied Verstappen, who led from the start while Hamilton passed Ferrari's Sebastian Vettel around the outside for second.

Victory lifted the Dutchman to third in the drivers' championship and best of the rest behind Hamilton and Mercedes team mate Valtteri Bottas, who suffered an engine-related retirement that brought out a first safety car.

Leclerc had started the day third overall, 14 points ahead of Verstappen, but a late duel with Vettel ended in recrimination.

The Monegasque passed the four times world champion, who was starting his 100th race for Ferrari, but Vettel came back and the two banged wheels.

Vettel's rear tyre became a flailing carcass while Leclerc, who had climbed from 14th on the grid after an engine change, was hobbled by a smashed front suspension.

"What the hell?," shouted Leclerc while Vettel wondered what his team mate was doing. Both were summoned to see the stewards, who took no further action.

The first pitstop almost cost Verstappen dearly, with the Dutchman held up by Kubica exiting almost into him, an unsafe release that saw the Pole handed a five-second penalty.

Hamilton, who had pitted moments before on lap 20, was ahead but Verstappen swept past him after a brief duel.

The Mercedes driver pitted again on lap 44 for fresh tyres, but Verstappen countered with a faster stop of his own.

The Dutchman then pitted when Bottas pulled over and triggered the safety car on lap 53, with Hamilton, instructed to do the opposite to Verstappen, staying out to become a sitting target at the re-start.

The second safety car triggered by Ferrari offered Hamilton a chance to take on new tyres and he came back out for a final rush for the podium, with two laps of racing remaining.

Passing Gasly for third, he tried to pass Albon and collided.