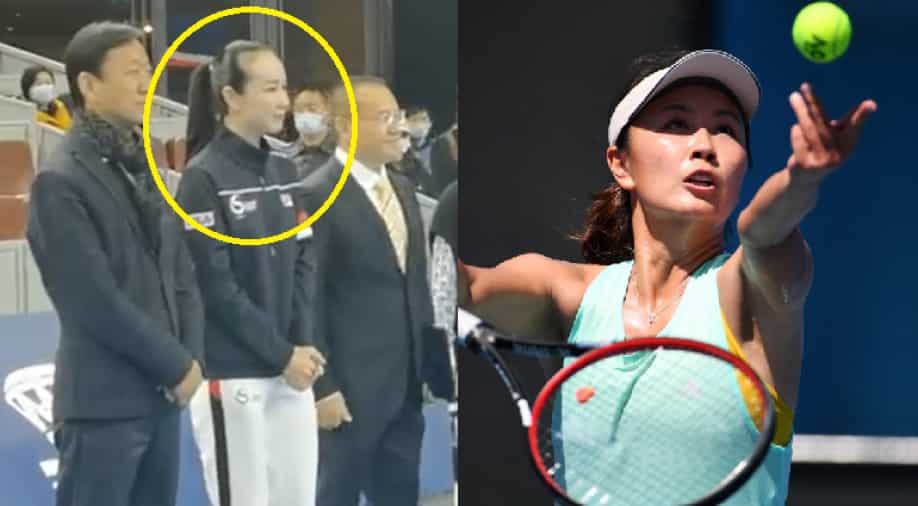 'Missing' Chinese tennis star Peng Shuai can be seen waving at the audience in a video of an alleged opening ceremony of some tournament shared by the Chinese state media on Sunday.

The mystery surrounding Chinese tennis player Peng Shuai continues to deepen with each passing day. While the Chinese state media has been desperately trying to force the narrative that the tennis star is fine, her failure make a public appearance or contact the Women's Tennis Association (WTA) has led to global outrage.

After sharing her purported pictures allegedly taken from Peng's WeChat thread, and a video of her eating at a restaurant with friends and coach, the Chinese state media on Sunday released another video of the 'missing' tennis star.

In the video shared on Twitter by Hu Xijin, the editor-in-chief of state-owned Global Times newspaper, Peng can be seen waving at the audience during the opening ceremony of the final of a teenagers’ tournament in Beijing.

In the video, the 35-year-old can be seen wearing a dark blue jacket and white trousers and waving at the audience with a smile on her face. Xijin claimed the video was captured by Global Times photo reporter Cui Meng at the event.

"Peng Shuai showed up at the opening ceremony of a teenager tennis match final in Beijing on Sunday morning. Global Times photo reporter Cui Meng captured her at scene," he wrote in a tweet along with the video.

Peng Shuai showed up at the opening ceremony of a teenager tennis match final in Beijing on Sunday morning. Global Times photo reporter Cui Meng captured her at scene. pic.twitter.com/7wlBcTMgGy

Xijin shared another video where Peng can be seen signing autograph for kids at the same event.

Can any girl fake such sunny smile under pressure? Those who suspect Peng Shuai is under duress, how dark they must be inside. There must be many many forced political performances in their countries. pic.twitter.com/2oDOghBTvA

Peng's whereabouts have been a mystery ever since she levelled sexual assault allegations on former Chinese vice premier Zhang Gaoli, who is also part of the country's ruling Communist Party's Standing Committee. Peng had taken to Chinese social media platform Weibo on November 02 to accuse Gaoli of 'forcing' her to have sex with him.

Peng's post was deleted immediately after being published but it soon went viral. She has since been missing and is yet to make a public appearance amid rising concerns over her safety.

The video of Peng allegedly attending the opening ceremony of the tournament comes a day after Xijin had claimed on Twitter that she is fine and  will “show up in public and participate in some activities soon.”

While the Chinese state-run media has been working hard to force the narrative that the tennis star is safe, her mysterious disappearance has seen the likes of Novak Djokovic, Naomi Osaka and Serena Williams among others questioning China.

The WTA Chairman Steve Simon on Saturday released a statement after the Chinese state-run media had shared the video clip of Peng eating out with her friends and coach. He said the video alone was insufficient to prove Peng's safety while expressing concerns over her whereabouts.

"I am glad to see the videos released by China state-run media that appear to show Peng Shuai at a restaurant in Beijing. While it is positive to see her, it remains unclear if she is free and able to make decisions and take actions on her own, without coercion or external interference."

"This video alone is insufficient. As I have stated from the beginning, I remain concerned about Peng Shuai's health and safety and that the allegation of sexual assault is being censored and swept under the rug. I have been clear about what needs to happen and our relationship with China is at a crossroads," he added.

Disclaimer: The video has been posted on social media and WION cannot take responsibility or independently verify the details.