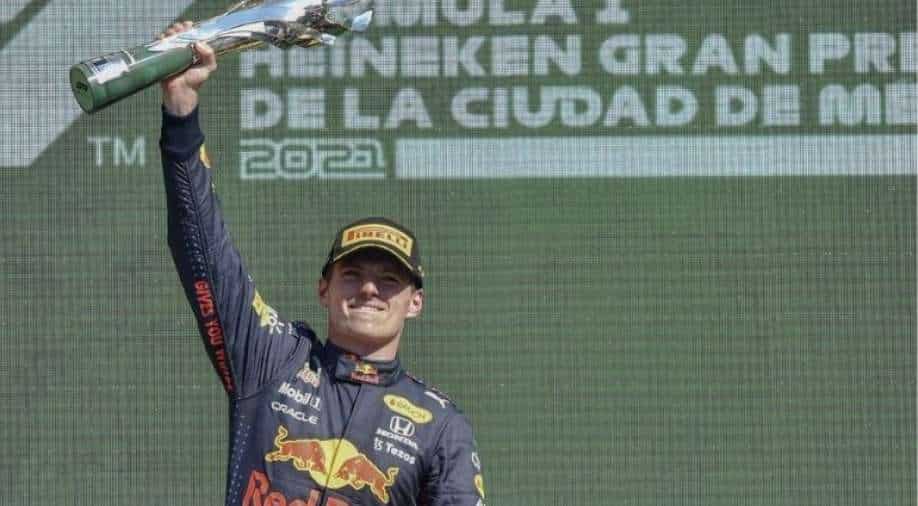 Red Bull closed the gap to champions Mercedes in the constructors' standings to one point.

Red Bull`s Max Verstappen celebrated a dominant win in the Mexico City Grand Prix on Sunday to surge 19 points clear of Lewis Hamilton in the Formula One championship with four races remaining.

Seven-times world champion Hamilton was second for Mercedes, holding off Red Bull`s Sergio Perez who became the first Mexican to stand on his home podium at a jubilant Autodromo Hermanos Rodriguez.

Red Bull closed the gap to champions Mercedes in the constructors' standings to one point.

"It`s still a long way to go but it`s of course looking good, but also it can turn around very quickly," said Verstappen, 24, of his big step forward in the championship battle.

Verstappen took the chequered flag 16.555 seconds clear of Hamilton to seal his ninth victory of the season, third in Mexico and 19th of his career.

The Dutchman seized the lead into the first corner from third on the grid, going three abreast with the two Mercedes and timing his braking to perfection, in what turned out to be the decisive moment of the race.

"I kept it on the track, came from third to first and that was basically what made my race because I could just focus on myself, and we had incredible pace in the car," he said.

Verstappen then gave Hamilton no chance to hit back once the safety car, deployed after collisions further back, was out of the way.

Hamilton, the most successful driver of all time with 100 career wins, said he gave it everything after being chased closely by Perez over the last 10 laps.

"I feel like I maximised it with what I have," said the Briton.

"We've got four races to go and we just have to keep pushing."

Perez was hoisted high on the shoulders of his mechanics as he waved the Mexican flag to salute the crowd before the podium ceremony.

"Of course I wanted more, I wanted to get a one-two for the team but I didn`t have a single chance to get through," he said after his third podium in a row after third places in Texas and Turkey.

"If I had a small chance I would have gone for it," added the 31-year-old, who also became the first Mexican to lead his home race after Verstappen and Hamilton had pitted.

The safety car was deployed until lap four after a collision at the start between Haas` Mick Schumacher and AlphaTauri`s Yuki Tsunoda, while McLaren`s Daniel Ricciardo tagged the back of Valtteri Bottas`s Mercedes and lost his front wing.

Bottas, who had taken a surprise pole position on Saturday, was spun around and dropped to 18th place after an immediate pitstop.

The Finn ended up 15th but pitted for fresh tyres to snatch the fastest lap from Verstappen at the end, denying the Dutchman a precious bonus point without it coming to Mercedes since he was outside the top 10.

"You have to congratulate Red Bull because the pace was just on another level," said Mercedes team boss Toto Wolff. "I don`t think we could have won the race even if we had stayed ahead in the first corner."

AlphaTauri`s Pierre Gasly was fourth with Ferrari duo Charles Leclerc and Carlos Sainz fifth and sixth to lift the Italian team ahead of McLaren and into third place in the constructors` standings.