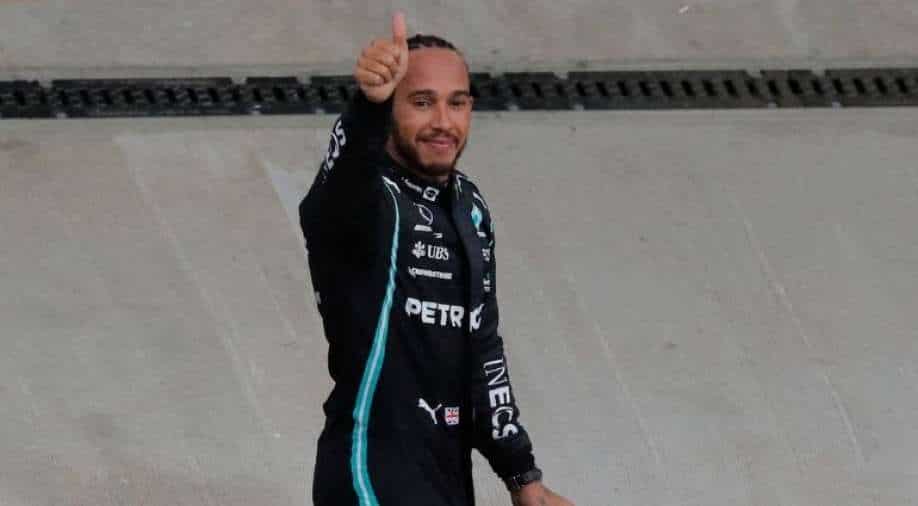 While Hamilton celebrated a personal century, his Mercedes team maintained their own 100% record in Sochi

Lewis Hamilton became the first Formula One driver to win 100 grands prix with a dramatic rain-assisted victory in Russia that sent the Mercedes driver two points clear in the championship on Sunday.

Red Bull's Max Verstappen finished an impressive second at Sochi's Olympic Park, after starting 20th and last due to engine penalties, thereby limiting the damage from his rival's fifth win of the season and first since July.

Spaniard Carlos Sainz was third for Ferrari on a day of hope and ultimate heartbreak for McLaren's Lando Norris as a late downpour dashed his hopes of a first win.

The 21-year-old Briton started on pole for the first time in his career, lost out to Sainz at the start but then passed the Spaniard 13 laps later and was still leading when the clouds burst.

Norris decided to stay out on slicks, after Hamilton had stopped for intermediates on team advice, with the top two comfortably clear of the rest.

He then plunged from first to seventh in the last three laps after slipping, sliding off and eventually having to pit.

"What a race the weather provided. It's taken a long time to get to 100 and I wasn't sure it would come," said Hamilton, who last season passed Ferrari great Michael Schumacher's previous record of 91 wins.

"Max must've done a really great job to come up to second from last. We've got our work cut out," added the Briton, who started the day five points behind Verstappen with seven races remaining after Sochi.

Hamilton had slipped to seventh at the end of lap one, losing out at the start after being fourth on the grid, but made up places as those ahead of him pitted early.

He was still 25 seconds behind Norris after his final stop but the team had read the weather right and the tyres easily allowed him to catch up and overtake his compatriot for a landmark win.

"The team made a great call right at the end. I didn't want to let Lando go and I didn't know what the weather was doing," said Hamilton.

"It would've been tough to get past Lando unless we came up to some traffic or he made a mistake, which he hasn't been doing, so then the rain came and it was very opportunistic."

While Hamilton celebrated a personal century, his Mercedes team maintained their own 100% record in Sochi.

The champions have won every Russian grand prix since the first in 2014, Hamilton triumphant in five of them.

Australian Daniel Ricciardo, winner of the previous race at Italy's Monza circuit, was fourth for McLaren, with Valtteri Bottas fifth for Mercedes after starting 16th. Both benefited from stopping early for the treaded tyres.

Kimi Raikkonen, returning for Alfa Romeo after missing the previous two races due to a positive COVID-19 test, was eighth and Mexican Sergio Perez ninth for Red Bull.

George Russell, who had started a stunning third for Williams, struggled to 10th -- his fourth points finish in the last five races for a team that had not scored for two years before that.

The only consolation for Norris, and it was a scant one on an afternoon that had offered so much more, was a bonus point for fastest lap.

Mercedes stretched their lead over Red Bull in the constructors' standings to 33 points.

Haas driver Mick Schumacher, son of Michael, was the only retirement from the race.

The next round is at Turkey's Istanbul Park on Oct. 10.

Hamilton won his record-equalling seventh title there last November in a wet and slippery race but this year's championship chase looks like going the distance.