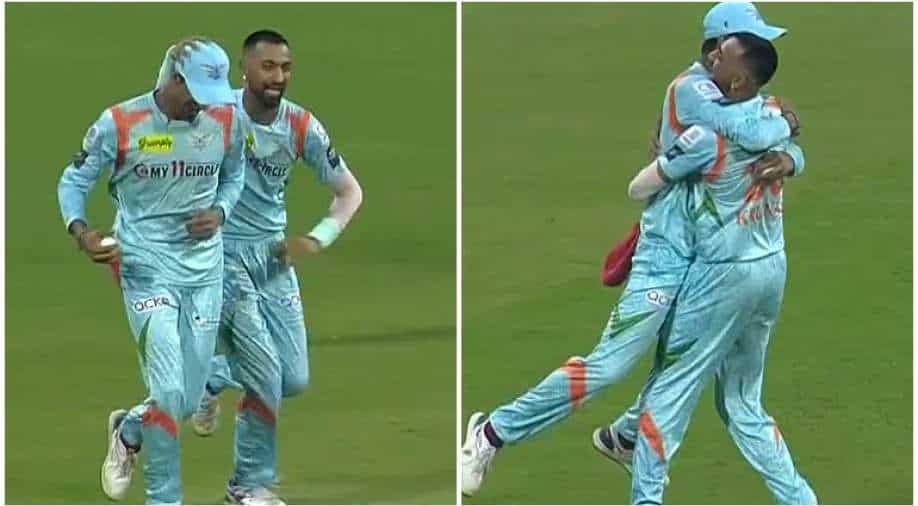 IPL 2022 - During Lucknow Super Giants' face-off versus Gujarat Titans, Krunal Pandya and Deepak Hooda made heads turn with a hug as the duo buried their hatchet. Here's the video:

Match 4 of the IPL 2022 edition saw two debutant teams in the form of Lucknow Super Giants (LSG) and Gujarat Titans (GT) face each other at the iconic Wankhede Stadium, Mumbai on Monday evening (March 28). As both were eager to start off with a bang, it was a riveting contest which went down to the last over before Hardik Pandya's Gujarat emerged on top with a five-wicket win.

It was a topsy-turvy contest from the word go. Courtesy Mohammed Shami's early strikes, KL Rahul-led Lucknow were on the back foot with their big guns back in the pavillion (such as Rahul, Evin Lewis and Quinton de Kock) before Deepak Hooda-Ayush Badoni's fifties and Krunal Pandya's 13-ball 21* as the team posted 158-6. In reply, Gujarat rode on Matthew Wade-Hardik's knocks but were behind in the run-chase ahead of the final overs before David Miller's 30 (21) and Rahul Tewatia's match-winning 24-ball 40* propelled Gujarat to their maiden win.

During the game, there was a heartfelt moment between Lucknow teammates Krunal and Deepak. For the unversed, both Hooda and Krunal were involved in a huge controversy during last year's Syed Mushtaq Ali Tournament, where they were a part of Team Baroda. Back then, Hooda had accused his state captain Krunal of bullying him and, later, went on to part ways and quit the team. Nonetheless, it seems everything is now in the past and the duo have let bygones be bygones.

During Gujarat's chase, Hooda caught opener Shubman Gill, off Dushmantha Chameera, as the right-hander fell for a 3-ball duck. Thus, an excited Krunal came running towards Hooda and the two hugged it out in the middle:

Earlier, Krunal had even given a pat on Hooda's back after the former replaced him in the middle following the right-hander's dismissal during Lucknow's innings. Both of them had a good game (Krunal and Hooda also claimed a wicket each) but couldn't take their team to a winning start.

Post Lucknow's close defeat, captain Rahul said at the post-match presentation, "It was a phenomenal game. What a way to start the campaign. Starting off like that with the bat was not ideal but the way we recovered was phenomenal. It gives us so much confidence when the batters in the middle and lower order can do the job. We know with the Wankhede the ball can do a bit at the start and if we can get through that it will be ideal. We couldn't have started the campaign in any better way."