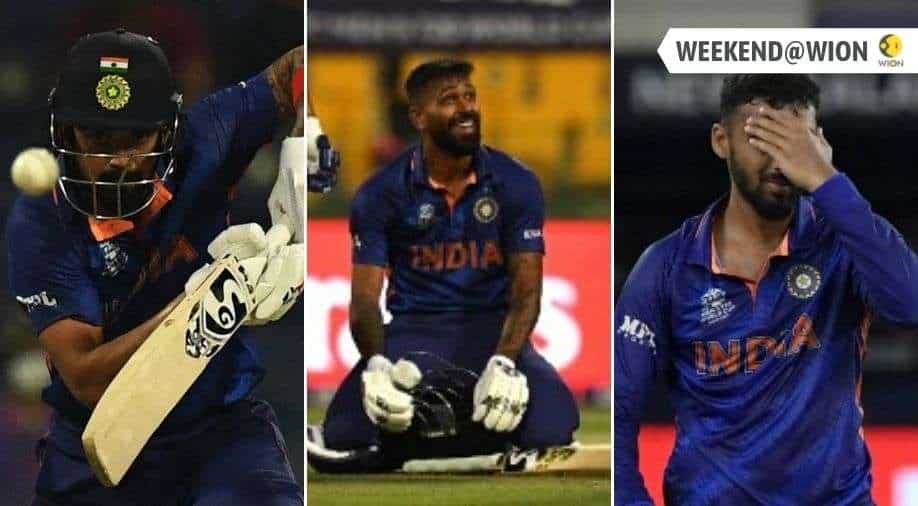 Team India's T20 World Cup 2021 campaign might end on Saturday if Aghanistan lose against New Zealand in their final Super 12 game. Here is a look at the hits and flops from the Indian team in what has been an abysmal campaign for Virat Kohli's men in the UAE.

India were one of the overwhelming favourites heading into the T20 World Cup 2021. Expectations were high from Virat Kohli's men, who had played some amazing cricket in the build-up to the World Cup and dominated across formats. However, what unfolded in the UAE was hard to believe for many as India's campaign came crashing down in a matter of just two games.

Two games was all it took as the Men in Blue found themselves on the verge of an early exit from the competition. A lot was said about India's unbeaten record against Pakistan in World Cups with not many writing off the Babar Azam-led side even before they took the field against their arch-rivals in the opener in Dubai on October 24.

Pakistan produced a brilliant all-round performance to thoroughly outclass India and win the game by ten wickets to get off to a perfect start in the tournament. India's defeat not only marked an end to their flawless streak in World Cup matches against Pakistan but did enough damage to the team's confidence as they looked out of sorts in the next game against New Zealand.

In what was a painful repeat of the thrashing at the hands of Pakistan, New Zealand crushed India by eight wickets to further dent their hopes of qualifying for the semi-finals. Just when it looked like Kohli's team was set for an early exit from the tournament, India bounced back emphatically to thrash Afghanistan and Scotland in their next two games and keep their hopes alive.

However, their fate was no more in their hands with the Kohli-led side in desperate need of a favour from Afghanistan to finish above them and New Zealand in terms of net run rate. India needed Afghanistan to beat New Zealand to help them salvage their campaign, however, the Mohammad Nabi-led side suffered an 8-wicket defeat in their final Super 12 clash on Sunday to confirm India's exit from the tournament.

Not many Indian players have so far managed to impress in the ongoing T20 World Cup but there have been a few who have risen after a disappointing start and have helped the team stage a fightback after what was a disastrous start. Here we take a look at the hits and flops from Team India's campaign so far in the T20 World Cup 2021 with a game to spare against Namibia.

Opening batter KL Rahul has been one of the few sparks in the Indian team from what has been an abysmal campaign so far in the T20 World Cup. Rahul faltered in the first two matches against Pakistan and New Zealand with 21 runs combined, before redeeming himself with two brilliant knocks in the next two games.

The stylish right-hander roared back to form with a classy 69 off 48 balls against Afghanistan where he slammed two sixes and six fours to help India register a big win by 66 runs. He continued his stunning form against Scotland as he took the Scottish bowlers to the cleaners to race away to a fifty off just 18 balls, helping India chase down 89 runs in just 39 balls.

Rahul smashed six fours and three sixes in his fiery cameo as India absolutely mauled Scotland. Rahul is India's highest run-getter so far in the tournament with 140 runs from 4 matches.

After a disappointing outing against Pakistan where all Indian bowlers went wicket-less, Bumrah was the first Indian to pick up a wicket in the tournament. He dismissed Martin Guptill in the game against New Zealand to open India's wicket account in the tournament and followed it up with the dismissal of Daryl Mitchell in the same game.

Bumrah bowled at an economy of 4.80 and was India's best bowler against the Kiwis but his efforts were not enough to push India over the line.

He finished with excellent figures of 1/25 in his 4 overs against Afghanistan before wreaking havoc against Scotland. Bumrah bowled at an economy of just 2.70 in his two overs against Scotland, conceding 10 runs to return with two wickets. Fair to say, Bumrah has been one of the most consistent bowlers for the Men in Blue so far and has 5 wickets to his name in four matches.

Trolled viciously after an off day against Pakistan, Mohammed Shami has since scripted a remarkable turnaround in the tournament. Shami was targeted over his faith and was on the receiving end of horrific abuse on social media after his poor outing against Babar Azam's men. He once again went wicket-less against New Zealand as questions were raised over his place in the team.

Shami's redemption came against Afghanistan where he picked up the important wickets of Mohammad Shehzad and Mohammad Nabi to derail their batting line-up and finish with sublime figures of 3/32 in his four overs. That was just the start as Shami once again wreaked havoc against Scotland.

The senior pacer responded to his critics in style as he picked up another three-wicket haul against Scotland while conceding only 15 runs from his 3 overs. Shami has been India's highest wicket-taker so far in the tournament with six wickets from four matches.

One of the senior-most members of the Indian squad in the ongoing T20 World Cup 2021, Buvneshwar has been around for several years now. He was once undroppable in T20s for India but the right-arm speedster has been struggling with his form ever since his return from injury last year.

Bhuvneshwar played in India's ten-wicket loss against Pakistan in the opener and was taken to the cleaners by Babar Azam and Mohammad Rizwan to concede 25 runs in his three overs without taking a wicket. He was dropped for Shardul Thakur in the next game against New Zealand before sitting out in the next two games as well.

There were a lot of expectations from Bhuvneshwar as one of India's prominent bowlers in the T20 World Cup but he has had a disappointing campaign.

The star all-rounder didn't bowl at all in the second leg of the Indian Premier League (IPL) 2021 for Mumbai Indians but was picked purely as a batter in the World Cup squad despite question marks over his place in the side. While he didn't bowl in the first game against Pakistan, Hardik clearly struggled with the bat.

He also picked up a shoulder injury during the game and was later taken for scans leading to questions over his fitness. Hardik was expected to be one of the vital cogs of India's wheel in the T20 World Cup and be a game-changer for the Kohli-led side, however, he has failed to deliver with both the bat and the ball in the tournament.

Touted as a rising mystery spinner, Varun Chakaravarthy has been a huge letdown for Team India at the T20 World Cup so far. He was picked over the likes of Yuzvendra Chahal and Kuldeep Yadav in the T20 World Cup squad but has failed to live up to the expectations in what has been a woeful campaign for him so far.

After going wicket-less in the first two games against Pakistan and New Zealand, Chakaravarthy was rightfully dropped from the playing XI against Afghanistan before making a comeback in the Scotland encounter. He once again failed to pick up a wicket against Scotland and is yet to open his account despite having bowled 11 overs in the tournament so far.