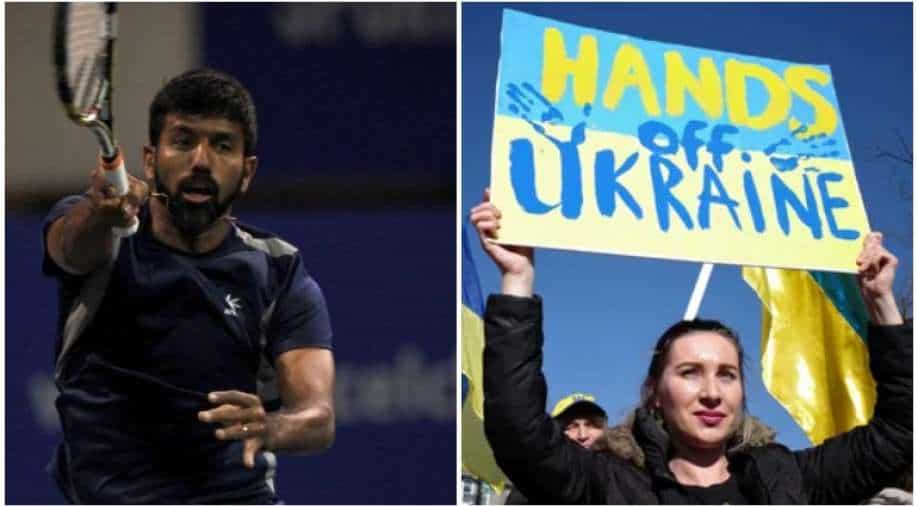 In an exclusive interaction, the 41-year-old Rohan Bopanna expressed his concern over the turn of events in Ukraine and reacted to the changes in the tennis fraternity following Russia's invasion. He has also shared a strong message for one and all:

Russia's invasion of Ukraine has gained eyeballs over the past few days. The Ukraine crisis continues to make the headlines as the whole world has slammed Vladimir Putin-led Russia's tactics and have united in extending support to Ukraine amid such testing times.

Following the Ukraine-Russia conflict, the sporting world has also seen many sporting bodies coming together and shunning Russia after the unfortunate turn of events. Recently, WION's Sports Editor Digvijay Singh Deo also got a chance to interact with India's ace tennis player Rohan Bopanna. The 41-year-old veteran player expressed his concern over the turn of events in Ukraine and reacted to the changes taking place in the tennis fraternity following Russia's invasion. He has, thus, voiced his opinion on the entire matter and shared a strong message as well.

In the exclusive interaction, Bopanna said, "It is very difficult for every athlete or person out there. It is difficult. Players can't do much as they travel the whole world. It is not easy on them. Sometimes you don't know whether it is the right call. Players are also getting affected. It is a very Catch 22 situation but it is never easy on athletes. (On ITF along with the ATP and WTA allowing Russia, Belarus players to play but banning them in team events), he asserted, "Banning, anyway, isn't the right way. When so many government bodies are involved, we don't know the pros and cons. Something like this happens, it is very very difficult. If the players can play, it is then ok but still never easy." Lastly, Bopanna called for peace and added, "Sport brings in great culture, friendship and peace....That's what we need today in the world. "

In the aftermath of Russia's invasion of Ukraine, the Association of Tennis Professionals (ATP) and World Tennis Association (WTA) -- i.e. the governing body of men and women's tennis -- announced on Wednesday (March 02), that the Russian and Belarus players will be banned to take part in team events but can compete on tours, including Grand Slams, sans any national identity. The decision came despite many sports governing bodies -- such as IOC, FIFA, UEFA -- going ahead with imposing bans on the Russian players.

"The WTA and ATP Boards have also made the decision to suspend the WTA/ATP combined event, scheduled this October in Moscow. The ITF Board has made the decision to suspend the Russian Tennis Federation and Belarus Tennis Federation membership. The international governing bodies of tennis stand united in our condemnation of Russia’s actions." the ATP and the WTA said in a joint statement.

"Our thoughts are with the people of Ukraine, and we commend the many tennis players who have spoken out and taken action against this unacceptable act of aggression. We echo their calls for the violence to end and peace to return," the tennis bodies added.