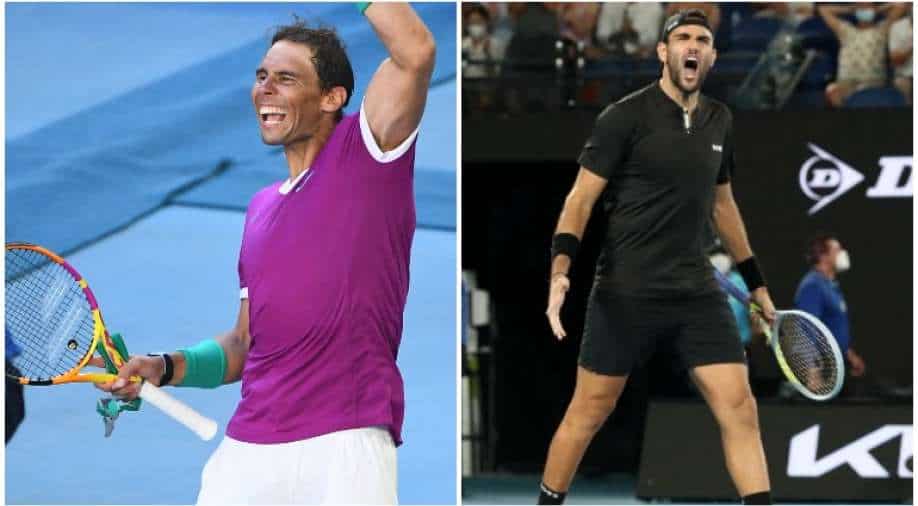 Aus Open 2022: While Rafael Nadal will take on Italy's Matteo Berretini in the first semi-final, Stefanos Tsitsipas will lock horns with Daniil Medvedev in the second semi-final later on Friday (January 28). In an exclusive interaction with Nandan Bal, here's what the veteran coach has to say on the two semi-final fixtures:

On Friday (January 28), the two men's singles semi-finals of the Australian Open will be held in Melbourne. While Rafael Nadal will take on Italy's Matteo Berretini in the first semi-final, Greek player Stefanos Tsitsipas will lock horns with Daniil Medvedev in the second semi-final later in the day. The stage is set for a riveting end to the first Grand Slam of the year with all four semi-finalists looking in fine form to walk away with the title.

Speaking of Nadal, he is the most experienced of the lot and will leave no stone unturned to become the first-ever male tennis player to reach to 21 Grand Slam titles. His closest rivals Roger Federer and World No. 1 Novak Djokovic are also on 20 major titles each, however, the Swiss maestro didn't participate in the mega event Down Under whereas Djokovic's Covid-19 vaccination issue forced him to be deported ahead of the marquee tournament in Melbourne.

Hence, Nadal will not leave this golden opportunity to get to the magical 21 Grand Slam titles. Nonetheless, he has a new rival standing in his way before the final. Italy's Berretini isn't a pushover by any means and will give a tough fight to the Spaniard for a place in the summit clash. Both the semi-finalists are heading into the last four by fighting it hard in the quarters. While the Italian emerged on top of Gael Monfils in the quarters, in a five-set thriller, Nadal also didn't have it easy versus Denis Shapovalov to win, 6-3, 6-4, 4-6, 3-6, 6-4.

Similarly, Russian player Medvedev was also involved in a humdinger of a quarter-final whereas Tsitsipas had it easy versus Jannik Sinner; winning in straight sets.

Ahead of the two semis, WION's Sports Editor Digvijay Singh Deo had a quick interaction with Indian tennis coach Nandan Bal. The veteran coach shared his take on two semi-finals. Beginning with Nadal-Berretini clash, Nandan said, "With Djokovic and Roger both not playing, Nadal is the only one from the Big Three. That being said, hats off to him and his fitness to be still trying hard and competing in the semis. Only difference is that he is surrounded by bunch of guys who are less than 25. The quality of tennis (in the men's quarters) has been top-notch. These three young guys will be there for long. They are so full of promise. These players -- such as Medvedev, Tsitsipas, Berretini and the likes -- should be the nucleus for the next ten years."

On the first semis, Nandan picked the Italian as the one who will have the edge. He said, "First of all, on paper without Nadal is the favourite. However, I have my reservations on that. Berretini is ten years younger. He has got the legs. Also, when was the last time we saw Nadal lose two sets on the trot after leading by two? For him to lose that third or fourth set, it was an indication that the age is catching up, fitness or his mind is also catching up. Somebody like a Berretini is got to keep pushing Nadal. Two back-to-back five-sets will be a huge challenge for Nadal."

Shifting his focus to the second semis, Nandan pointed out, "At this point of time, Medvedev is the favourite. He was out of form but yet found his way to come back and win the quarters (winning a five-set thriller versus Felix Auger Aliassime). Once he got the momentum, he took off and won. Champions know how to work their way. Till they get their rhythm back, they will keep fighting hard and once they do, they do not give others any chance. "

The 62-year-old Nandan Bal added, "Medvedev has come across so mentally tough. I think Tsitsipas is going to have the crowd on his side following Medvedev's recent press. But like I said, Medvedev is the next toughest guy after Novak Djokovic."