'CSK will try to get him back, no one will expect us': How RCB planned Faf du Plessis' signing at IPL auction 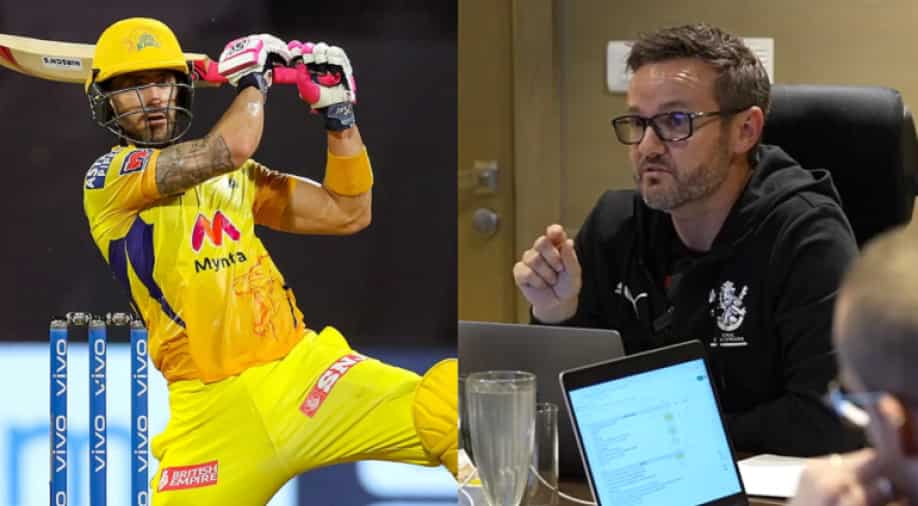 Royal Challengers Bangalore (RCB) recently shared a video of their pre-auction drill where they had planned how they will sign Faf du Plessis at the IPL 2022 mega auction.

Royal Challengers Bangalore (RCB) on Sunday (February 20) shared a video of their pre-auction planning which was done ahead of the recently-concluded Indian Premier League (IPL) 2022 mega auction. RCB roped in a number of stars players at the IPL mega auction but their key signings were former South Africa captain Faf Du Plessis and Sri Lanka all-rounder Wanindu Hasaranga.

RCB made former Chennai Super Kings (CSK) star Du Plessis their first signing at the IPL 2022 mega auction after spending a sum of Rs 7 crore (INR 70 million) to secure his services for the upcoming season. Du Plessis had a phenomenal season for CSK last year as he ended up as the second-highest run-getter in IPL 2021 with 633 runs from 16 matches.

In the video shared by RCB of their pre-auction planning, the franchise's Director of Cricket Mike Hesson can be seen stressing why signing Du Plessis will be a great move for them. Hesson also goes on to predict that CSK will try to get the South African batter back at the auction and that not many will expect RCB to make a move for him.

“With the options we have in our current squad and the uncertainty surrounding those, and the options we have at the auction, where we think we can gain a real advantage is with Faf du Plessis who is highly experienced. He has captained South Africa for long, won the IPL many times and is a very consistent performer in terms of how he operates. He's a strong character and highly respected. These are a lot of attributes you want in a leader,” Hesson says in the video.

“It's pretty clear that CSK will likely try and get him back, as they do with all their players. He's also in the marquee group; for us to have some structure going forward, we need to allocate some budget to get that. We would want to go through teams who might look at him. CSK will obviously make a bid, no one will expect us in terms of who we are likely to go for,” he explains further.

As it turned out, CSK did try to get back Du Plessis at the IPL 2022 mega auction but pulled out of the race after the bidding went out of their budget. RCB ended up getting the experienced batter for a sum of Rs 7 crore. Apart from Du Plessis, Hesson also states in the video that RCB should prioritise signing Sri Lankan all-rounder Hasaranga on day 1 of the mega auction.

“We see his (Faf's) role along with Hasaranga as two most important overseas roles to get on the first day. There are a number of different permutations and combinations to get to this point and I'm sure there will continue to be some. But the primary role is to start and fine-tune how we have to go about achieving that. The priority on Day 1 is to get Hasaranga and Faf,” Hesson said in the video.