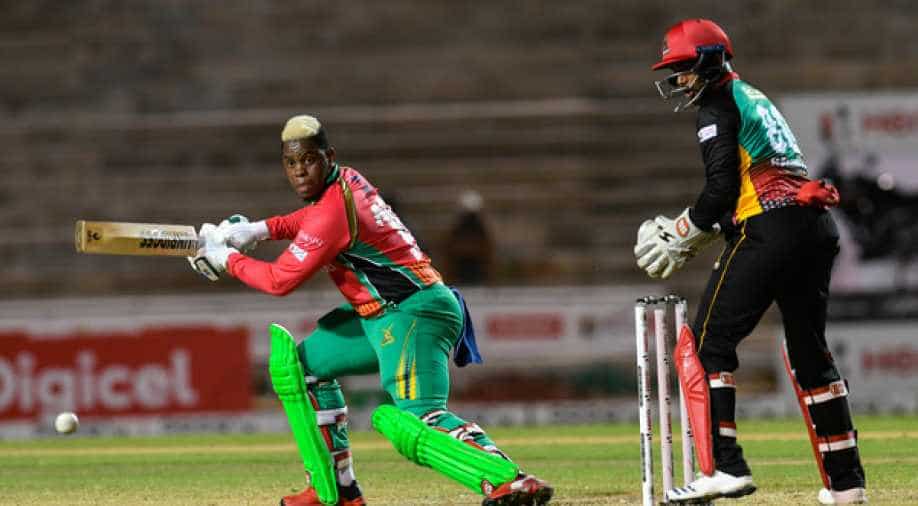 Brilliant bowlers and red-hot Hetmyer get the job done (Photo: CPL via Getty) Photograph:( Others )

Keemo Paul and the spinners handsomely repaid Guyana Amazon Warriors’ decision to go with an unchanged XI from their opening day loss, and Shimron Hetmyer’s brilliance meant even a misfiring batting line-up won with time to spare, consigning the St Kitts & Nevis Patriots to the bottom of the Caribbean Premier League (CPL) table.

Keemo Paul and the spinners handsomely repaid Guyana Amazon Warriors’ decision to go with an unchanged XI from their opening day loss, and Shimron Hetmyer’s brilliance meant even a misfiring batting line-up won with time to spare, consigning the St Kitts & Nevis Patriots to the bottom of the Caribbean Premier League (CPL) table.

Lewis started to find his range, sending Tahir over the cover boundary, and taking Naveen’s second over for 18. But smart bowling from Green and even better keeping from Nicholas Pooran saw Lewis stumped for 30 as his back foot lifted for just a moment. The Patriots ended the powerplay at 54/2.

Ben Dunk picked up Shepherd over midwicket to break an 18-ball spell without a boundary, but Green put the squeeze right back on. The pressure told, as first Ramdin was strangled down the leg-side off Paul and then Jahmar Hamilton fell to the googly as he did yesterday, Tahir his tormentor tonight.

With his team stuttering at 83/5, Patriots captain Rayad Emrit broke another lengthy boundary-less period, 26 balls this time. But Green finished his spell well, Naveen was equally accurate, and Tahir was unlucky not to finish with Emrit’s wicket. Emrit broke a third long boundary drought, of 22 balls, off Paul, but the latter had his revenge immediately as a hurried pull looped to Taylor at mid-on.

The Amazon Warriors kept Dunk quiet, and when he tried to run a desperate two, Paul and Pooran combined to run him out by a yard. Paul picked up another in the last over with Dominic Drakes, in for the injured Sohail Tanvir, holing out to square leg. Only four boundaries after the Powerplay told the story of the Patriots’ innings.

Early in the chase, Brandon King broke his CPL 2020 duck with a crisp straight drive and rasping square cut. Jon-Russ Jaggesar, in for Alzarri Joseph, asked questions with his left-arm spin but it was Sheldon Cottrell who made the breakthrough - King drilled a cut to cover, and out came the familiar salute. A wicket-maiden was a consolation birthday present for the former JDF man.

Hetmyer showed his class with a flurry of early boundaries, including a Hero Maximum that nearly took out the scoreboard. Chandrapaul Hemraj hit one of his own off Jaggesar, his first boundary of the tournament, and the Amazon Warriors cruised to 54/1 at the end of the Powerplay.

Hemraj failed to realise the danger of a powerful throw from Drakes and was sloppily run out, but by now the chase was well under control. An opportunity to dismiss Hetmyer went begging when sub fielder Kieran Powell failed to hold a powerful drive at cover, and the straight hit for four next ball rubbed salt into the wound.

A Hero Maximum walloped over Ish Sodhi’s head brought up Hetmyer’s second fifty in two games, this one off just 31 balls. A mix-up saw Taylor run out by most of the 22 yards, and Pooran fell to Emrit first ball, but by then the required run rate was well under five an over.

Emrit caused some late nerves with two wickets in two balls, including Pooran for a golden duck, and when Dunk held on inches off the rope to end Hetmyer’s charge, the Patriots entertained thoughts of a burglary. But the Amazon Warriors eventually stumbled over the line, and three overs left told the story far more than three wickets.