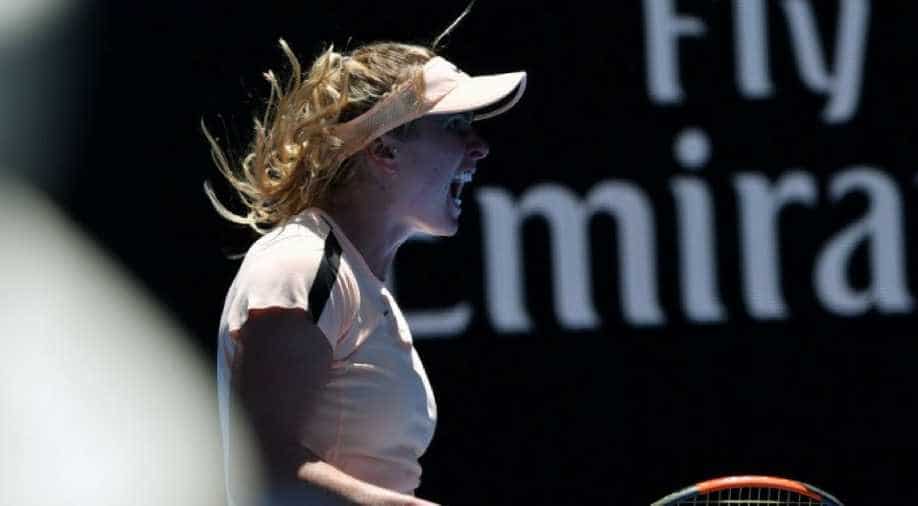 Elina Svitolina had to come from behind Wednesday against Katerina Siniakova to set up an all-Ukrainian third-round clash with teenage sensation Marta Kostyuk.

The world number four was largely in control but somehow dropped the first set on the way to a 4-6, 6-2, 6-1 win against her 59th-ranked Czech opponent in two hours and 14 minutes.

"I think she played well in the first set but I gave her one break, so I think it was kind of my mistake," said the fourth seed.

[4] @ElinaSvitolina overcame being a set down and the heat to roll onto 3R, where she’ll take on Marta #Kostyuk. #AusOpen pic.twitter.com/XCzd3PXmwa

But Svitolina cranked up the heat as temperatures rose on Rod Laver Arena, relentlessly overpowering her opponent from the back of the court to take the final two sets in dominant fashion.

"I thought I was going to melt today, was struggling a bit" Svitolina admitted. "Today I had enough sun, I just want to have an ice bath and recover."

Svitolina came into the first Grand Slam of the year in top form after winning the Brisbane International warm-up event after picking up five WTA Tour titles last year, more than any other woman.

She now faces 15-year-old Kostyuk whose fairytale continued Wednesday as she became the youngest player to reach the third round since Martina Hingis in 1996 in beating local wildcard Olivia Rogowska in straight sets.

The Roger Federer-inspired Swiss stunned Williams in round one, but was no match for the Thai star who moved into a Grand Slam third round for the first time.

It's tense stuff for Belinda #Bencic at @HisenseArena: Luksika #Kumkhum has an early 3-1 lead in the first set. #AusOpen pic.twitter.com/My5susATAh

Bencic, 20, was never in contention on a searing day on Hisense Arena, slumping 6-1 in the first set before putting up more fight in the second only to succumb 6-3.

Only Tuesday, fellow Swiss Federer, who won the Hopman Cup this month alongside Bencic, had heaped praise on her.

"She's still so young, she has a great career ahead of herself. I try to help her where I can," he said.

But he also added: "Still so much to improve."

For Kumkhum, it was a major achievement in her seventh Grand Slam main draw appearance.

"This is the best win of my career," she said afterwards.

"I kept telling my coach and family that I want to pass the second round, so I'm really happy."

Australian Open: Roger roars in round one