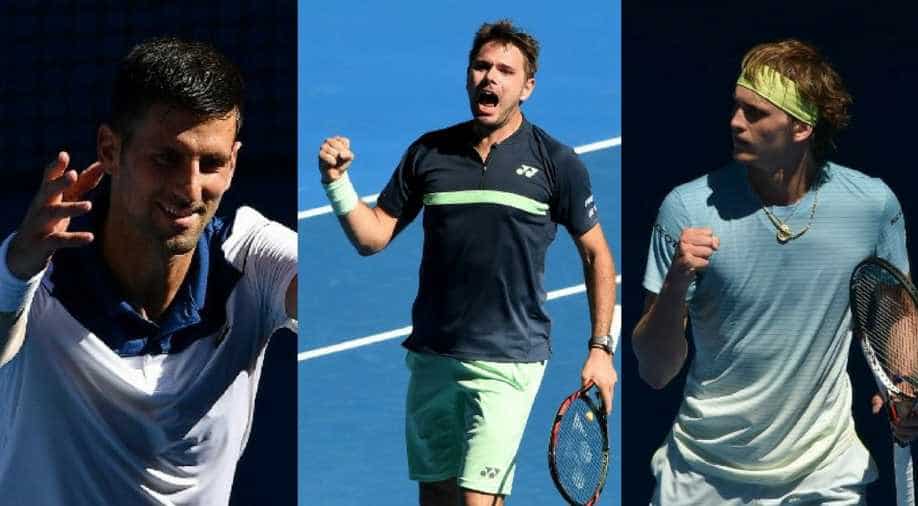 Stan Wawrinka, Alexander Zverev and Novak Djokovic celebrate their victory in the first round of Australian Open. Photograph:( AFP )

Former champion Stan Wawrinka was taken to four sets before winning his first match since knee surgery in July at the Australian Open on Tuesday.

It was a confidence booster for the 2014 Melbourne Park champion who had a troubled lead-in to the year's opening Grand Slam, pulling out of an exhibition event in Abu Dhabi.

The Swiss star, who defeated Rafael Nadal to win in 2014, has slipped to nine in the world rankings, having not played since his first-round Wimbledon loss to Russian Daniil Medvedev six months ago.

"It was a tough battle and I'm really happy to win my first match here after six months out," Wawrinka said.

Young German star Alexander Zverev needed a hard-fought three sets to get through his opening encounter at the Australian Open on Tuesday and spoke of his search for greater consistency.

Zverev, at the vanguard of the "NextGen" brigade, will face fellow German Peter Gojowczyk in the second round.

"My dog doesn't even realise who I am, so, you know, nothing changes at home."

Sascha Zverev may be Top 5 but that doesn't matter to much his pup...#AusOpen pic.twitter.com/SNRVjTwNeq

While the 20-year-old won five titles and was one of just four players to beat Roger Federer last year, he has yet to get beyond the fourth round at a Grand Slam.

"I think last year I was pretty consistent, apart from the end of the year," Zverev said.

"I think my game is getting more consistent with age as well. I think that's also something that is a factor of maturity.

"So I'm just trying to get better every single day, and that's what I'm here for," he added.

Six-times champion Novak Djokovic looked the part as he powered to a convincing first-round victory at the Australian Open on Tuesday on his return from an elbow injury.

It was an impressive performance, with the Serb breaking Young's left-handed serve six times, hitting 33 winners and conceding only 27 unforced errors.

The Nole of old.

"There is no better place to start than here in Australia, I love coming here, I love playing here," Djokovic told the crowd.

"It's been a long period without any official matches but I spent as much quality time as I could with my family.

"I wanted to start with the right intensity, which I have, I played perfect tennis in the first couple of sets and Donald came back in the third set."