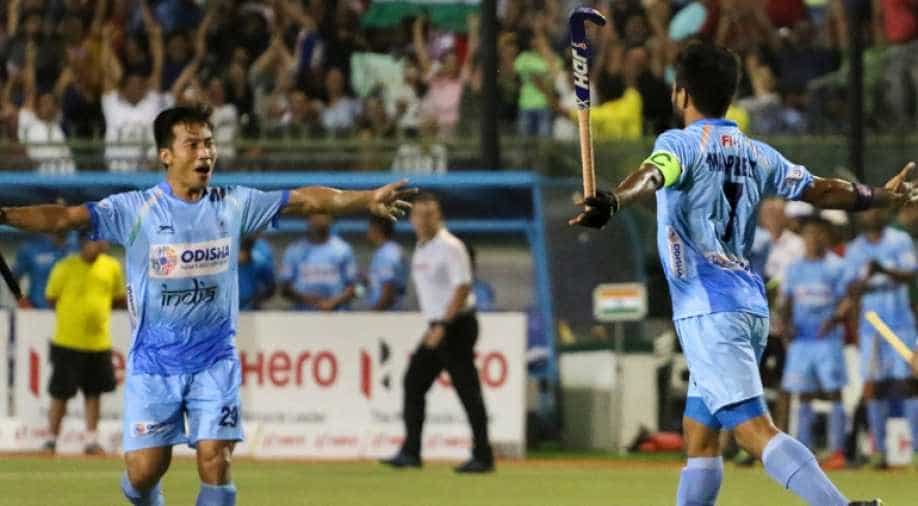 The Indian men's hockey team put up a clinical performance against Japan, demolishing the Asiad gold-medallists 9-0 for its third win in as many matches at the Hero Asian Champions Trophy here.

As many as six Indian players made entries on the score-sheet on Sunday night in a dominating show that reaffirmed their supremacy in Asia and showed that the below-par Asian Games performance was an aberration.

With their third successive win, India lead the six-team event's league standings with a maximum nine points, followed by Malaysia on six points from two games.

Strikers Lalit Upadhyay and Mandeep Singh scored two goals each, while drag-flicker Harmanpreet Singh converted a penalty stroke and a penalty corner to lead the goal-fest.

Upadhyay opened the Indian scoring in the fourth minute with a diving deflection and again got into the action in the 45th minute for his double, while Harmanpreet converted a penalty stroke in the 17th minute and then sounded the board with a low penalty corner shot in the 21st minute.

As Japan's defence was swept away by the Indian raids, Mandeep Singh capitalised on two openings in the last quarter -- in the 49th and 57th minute.

India defeat Japan by 9-0 margin in the only match played on day four of the Hero Asian Champions Trophy 2018 on 21st October 2018. Here's a look at the result of the day.#IndiaKaGame #HeroACT2018 pic.twitter.com/hYyIfmbhhi

Japan's goalkeeper Takashi Yoshikawa was injured in the eighth minute when he blocked Harmanpreet's penalty corner shot, only for the ball to rebound to Gurjant, who flicked it in. Thereafter, reserve Yusuke Takano had to bear the brunt of the Indian attack.

"The way we played was good. We played to a plan and did not allow Japan's team to play in a certain manner," said Harendra.
The game also saw a goal each from Akashdeep Singh (36th) and Sumit (42nd).

On the points table, Pakistan have three points from two matches, while Japan are on three points in three games. South Korea and Oman have lost both their matches.

Japan coach Siegfried Aikman said India were too strong to be contained in this contest.

"We tried our level best, but they were very strong. We were below the level as India sparkled with their speed, agility and hard-press game," said Aikman.