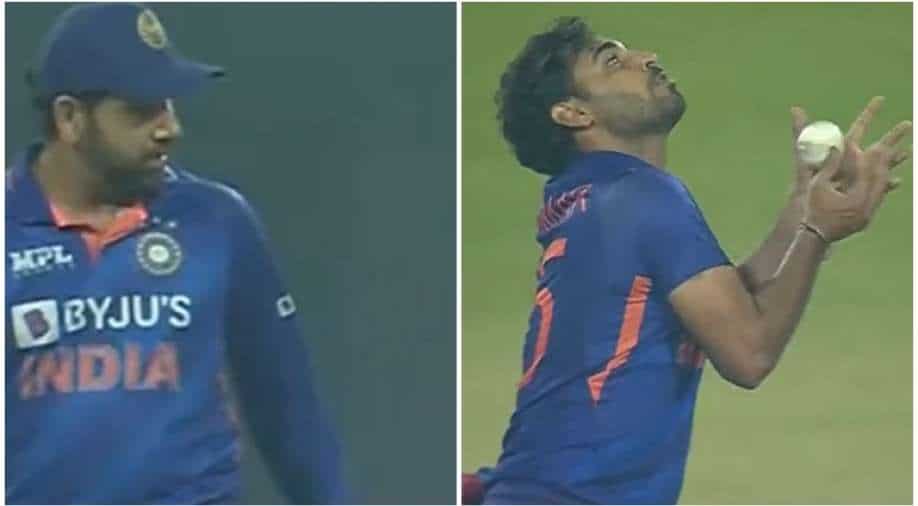 India vs WI, 2nd T20I: Bhuvneshwar Kumar reacted late to the catch (of Rovman Powell) as he thought wicketkeeper Rishabh Pant was going for it. In the mixup, he dropped the catch and Captain Rohit showed his frustration by kicking the ball. Here's the clip:

India and West Indies played out a humdinger of a clash in the second and penultimate T20I on Friday evening (February 18), at Eden Gardens, Kolkata. Being asked to bat first, Rohit-led Indian team posted a challenging 186-5, riding on half-centuries from Virat Kohli, Rishabh Pant and Venkatesh Iyer's quickire 33.

In reply, WI were 59 for 2 but were kept in the run-chase courtesy Rovman Powell and Nicholas Pooran's century-stand. The two's third-wicket stand kept Indian team on their toes in defence of 187. During the 16th over, when the chase was wide open and the Windies' batters were going hard, Bhuvneshwar Kumar was brought back into the attack in a bid to break the partnership.

Bhuvi used the short ball to good effect, pitching it outside off stump, as a well-set Powell went hard at it. He didn't get the desired timing as the ball went high up in the air. The pacer reacted late to the catch as he thought wicketkeeper Rishabh Pant was going for it. Thus, in the mixup, he dropped it and captain Rohit showed his frustration by kicking the ball. As a result, the two batters sneaked in another run, due to Rohit's kicking, to rub salt on the wounds of the home side.

Eventually, Bhuvi only dismissed Pooran (62) and bowled a game-changing penultimate over, conceding only 9 runs when the required rate was over 14, as India restricted the Kieron Pollard-led Windies for 178-3.

At the post-match presentation, Bhuvi told, "I was just believing in myself, Rohit told me that if I can give just 9-10 runs it will be difficult for them, so I just backed myself with the yorkers. There was a bit of dew, but I still backed myself and it came out well. He (Powell) was hitting it pretty hard, probably 200kmph (chuckles). It's always tough to bowl yorkers with the dew. When we bowled the slower balls it wasn't gripping and I changed my plan not to bowl slower balls, so it totally depends on the wicket. These guys are very powerful and if you bowl in their zone and it gets difficult. (The body)Feels good and don't want to say anything on that."

The experienced pacer returned with 4-0-29-1 as India took an unassailable lead, with one match to go (on Sunday, February 20).