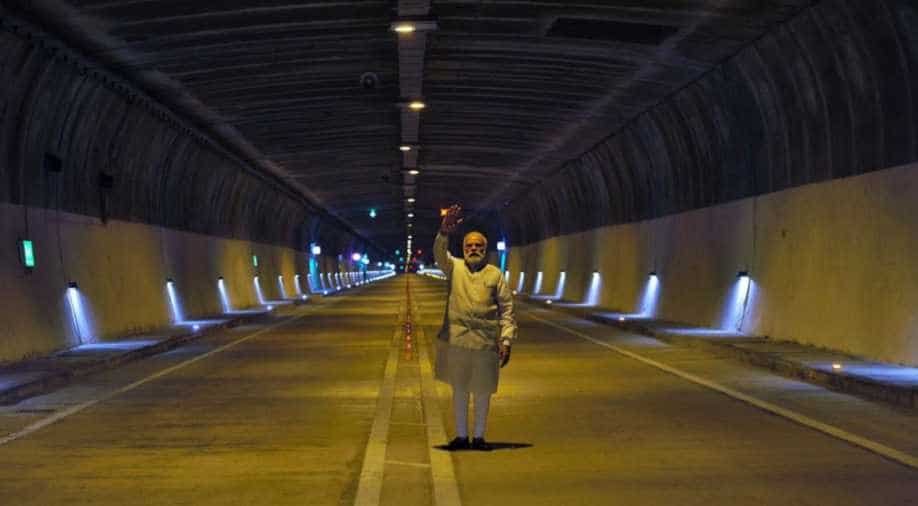 The Chenani-Nashri tunnel will reduce the travel time between Jammu and Srinagar by two hours. Photograph:(Twitter)
Follow Us

The 10.9 km-long Chenani-Nashri tunnel will reduce distance between the two places by 31 km.

The Chenani-Nashri Tunnel will have a transformative impact on Jammu & Kashmir’s progress. The tunnel is truly world class. pic.twitter.com/JxCPl8QIdC

The tunnel, which bypasses the snow-bound upper reaches of the Valley, will reduce the journey time between Jammu and Srinagar by two hours and provide a safe, all-weather route to commuters travelling from Jammu and Udhampur to Ramban, Banihal and Srinagar.

The prime minister drew a contrast between "misguided" stone-pelters who have been clashing with security forces and "the youth of Kashmir who are using the same stones to build infrastructure". He praised the "2,500 youth of Jammu and Kashmir who have toiled hard to make this tunnel a reality".

"On one hand, some misguided youth pelt stones in Kashmir, on the other hand, the same stones are carved by other youth to build infrastructure," PM Modi said while addressing a rally in Udhampur's Battal Balian.

"The path of terrorism has neither helped anyone or never will," he said.

Measures have been taken to safeguard the Himayalas and the environment, the prime minister assured.

He said the tunnel would "change the fortunes of the Valley's farmers", since their produce will not rot due to road closures.

The prime minister arrived in a special plane at the airfield at Udhampur, where the headquarters of the army's Northern Command are located. He flew in an army helicopter to Chenani where he inaugurated the tunnel that connects the Udhampur and Ramban districts on the highway.

The tunnel will save fuel worth nearly Rs 99 crores a year. "Rs. 27 lakh worth of fuel is likely to be saved per day," the Prime Minister's Office said earlier.

The PMO added that the tunnel "is an alternative all weather route".

"It is an alternative to the highway which often closes at the time of snow and rains. It will boost trade and increase revenue in the state. It will also help boost tourism," the PMO said.

It is equipped with world-class security systems, and is expected to boost tourism and economic activities in the state of Jammu and Kashmir.

The Chenani-Nashri tunnel is India's first and the world's sixth tunnel to have a transverse ventilation system, which provides fresh air to passengers.

The tunnel, constructed at a cost of Rs. 2,519 crore, will ensure a safe and swift passage for commuters, even in adverse weather conditions.

The Chenani-Nashri tunnel is among the longest highway tunnels in Asia. The tunnel, at an altitude of 1,200 meters, is a part of National Highway Authority of India's (NHAI's) project between Jammu and Srinagar, along the National Highway 44.

The key features of the tunnel are that it is a single-tube bi-directional tunnel, with a 9.35-metre carriageway, and a vertical clearance of 5 metres.

There is also a parallel escape tunnel, with 'Cross Passages' connecting to the main tunnel at intervals of 300 metres.

It also has smart features such as an Integrated Traffic Control System; Surveillance, Ventilation and Broadcast Systems; Fire Fighting System; and SOS call-boxes at every 150 metres.

Technologically, this is one of the most advanced road tunnels built in the country, surmounting challenges of terrain and distance, Sanjeev Sharma, Managing Director, ABB India, which has built the ventilation system said.