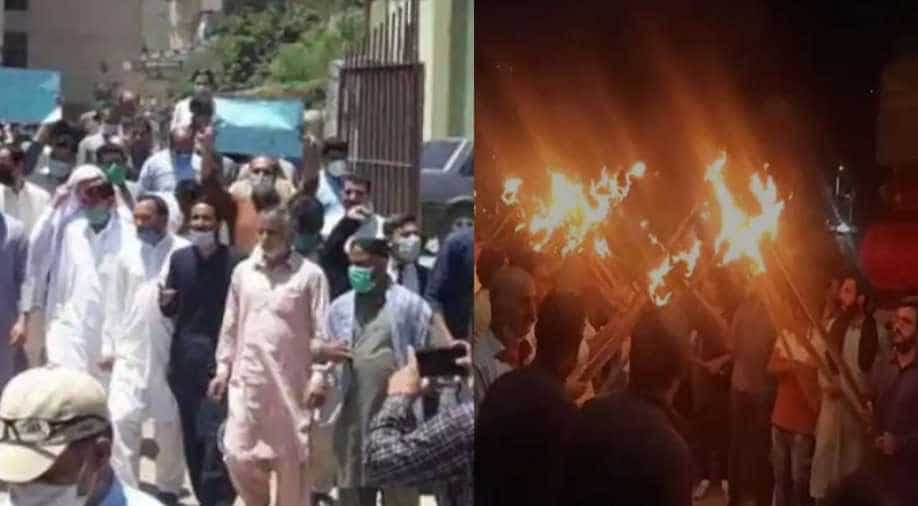 Massive protests and a torch rally was held in Muzaffarabad city of Pakistan-occupied-Kashmir (PoK). Photograph:( ANI )

"Neelum-Jhelum behne do, humein zinda rehne do," (Let waters of Neelum, Jhelum flow freely, let us live in our lands) was one of slogans heard during the torch protest held by angry locals in Muzaffarabad.

After Baluchistan, it was time for people in Pakistan occupied Kashmir (PoK) to strongly oppose Chinese influence and presence in Pakistan. People in Muzaffarabad, a city in POK held a torch rally on Tuesday to oppose Chinese designs to build dams on Neelum-Jhelum River.

"Neelum-Jhelum behne do, humein zinda rehne do," (Let waters of Neelum, Jhelum flow freely, let us live in our lands) was one of slogans heard during the torch protest held by angry locals in Muzaffarabad.

#WATCH: Protests and torch rally took place in Muzaffarabad city of Pakistan occupied Kashmir (PoK) last night, against the construction of mega-dams that will be built by Chinese firms on Neelum-Jhelum river. pic.twitter.com/aJhGPdfjnw

Pakistan and China have recently signed agreements for the construction of Kohala and Azad Pattan power Hydropower plants on Neelum-Jhelum river in POK. China is building the dams that will be connected with the grand design of China-Pakistan Economic Corridor (CPEC)

Protests against the dams are being held in and around Muzaffarabad in POK.

Chinese influence in Pakistan is growing much to the resentment of the local population.

Another example is Balochistan where China has developed the port of Gwadar. China is actively involved in improving Pakistan's railway network that eventually will help its own regional calculations. Several groups in Balochistan have even picked up arms against Chinese activities in the region.

China is known for its policy of extracting political benefits after 'flooding' a smaller nation's economy with loans and eventually rendering it unable to repay. Some experts believe that China may be on its way to employ a similar strategy in Pakistan.