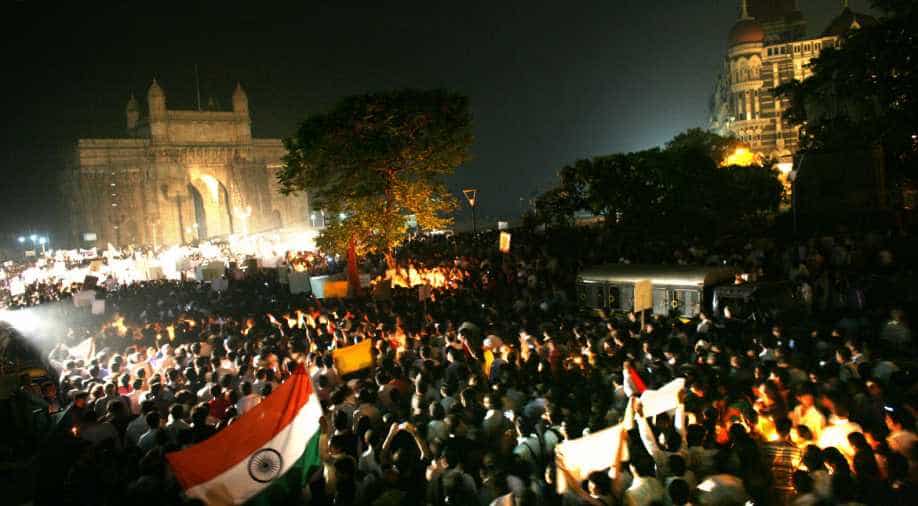 166 people were killed and several others injured in the attacks which took place on November 26, 2008. Photograph:( Getty )

Floral tributes were today paid to those who laid down their lives while fighting terrorists who had attacked Mumbai on this day eight years ago.

Maharashtra Chief Minister Devendra Fadnavis was among the dignitaries who paid homage at the 26/11 police memorial site at the Mumbai Police Gymkhana in south Mumbai.

"I pay homage to the brave policemen who fought for Mumbai's safety and laid down their lives for us on 26/11. We are proud of them and we will strive hard for safety and security of our state," Fadnavis said.

"We will strengthen police force with better equipment. It is our priority," he added.

Maharashtra police chief Satish Mathur and Mumbai CP Datta Padsalgikar were away on official duty and could not attend the ceremony.

Family members of the policemen, who lost their lives during the November 2008 attacks, were also present during the ceremony.

On November 26, 2008, 10 Pakistani terrorists arrived by sea route and opened fire indiscriminately at people. 166 people, including 18 security personnel, were killed and several others injured. Property worth crores was damaged.

Hemant Karkare -- who was the ATS chief at that time, Major Sandeep Unnikrishnan of the Indian Army, Mumbai's Additional Police Commissioner Ashok Kamte and Senior Police Inspector Vijay Salaskar were among those killed in the attack.

The attacks began on November 26 and lasted till November 29. The city's Chhatrapati Shivaji Terminus, the Oberoi Trident hotel, the Taj Mahal Palace hotel, Leopold Cafe, Cama Hospital and the Nariman House Jewish community centre were some of the places targeted by the terrorists.

Ajmal Kasab was the only terrorist who was captured alive. He was hanged four years later on November 21, 2012.