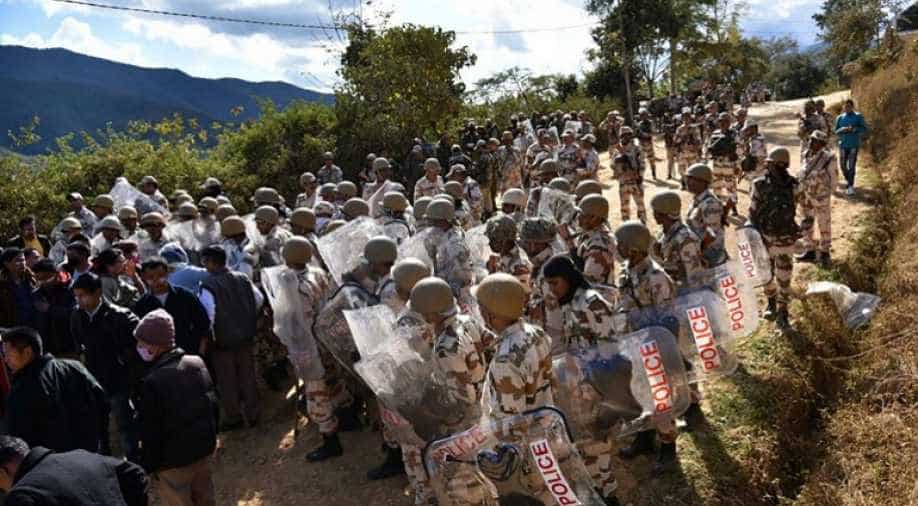 The United Naga Council imposed the blockade on November 1 against the creation of seven new districts in the landlocked state by bifurcating the existing ones. In photo: United Naga Council (UNC) supporters scuffle with Indian police officials. Photograph:( AFP )

The ripples of the ongoing economic blockade in India's northeastern state of Manipur were today felt in the national capital, with rival Manipuri and Naga groups staging protests over the tense law-and-order situation in the state which will go to polls in March.

While members of the Delhi Manipuri Society highlighted the "humanitarian crisis" due to the indefinite economic blockade imposed by the United Naga Council (UNC) since November 1, the Naga groups demanded imposition of President's Rule in the state.

The UNC had imposed the blockade against the creation of seven new districts in the landlocked state by bifurcating the existing ones.

"It is a question of survival. The blockade is inhumane. People are facing extreme difficulties in terms of food, medicines, fuel. The essentials to lead a normal life are either absent or beyond the reach of the common man. Is the government scared of the UNC? Is there something called rule of law?", Delhi Manipuri Society vice-president Sangeeta asked.

A large number of Manipuri youths took part in the day-long sit-in at Jantar Mantar here with posters containing messages demanding an immediate end to the blockade.

"We demand President's Rule because the law-and-order situation in Manipur is bad. New districts have been carved out undemocratically and UNC leaders are in jail. Nagas are not safe under the Manipuri security forces," Lakpachui Siro, convener of the committee, said.