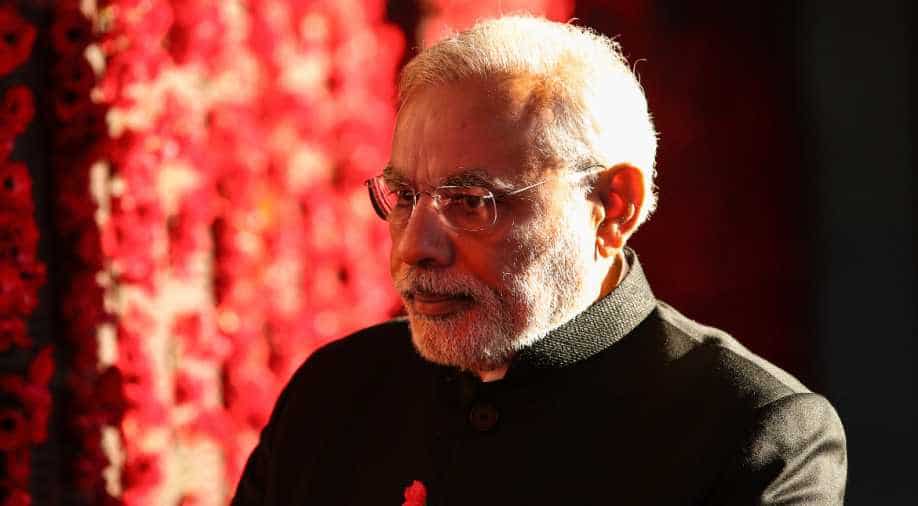 Mr Modi's Twitter handle has asked people to write in on the Narendra Modi app, telling him what they think of the demonetisation.? Photograph:( Getty )

Indian Prime Minister Narendra Modi addressed his party's parliamentarians this morning, urging them to tell people that his decision to demonitise 500- and 1,000-rupee notes was meant to strike against black money and terror as the Opposition upped its ante in the Parliament asking for Modi to appear personally and answer the questions.

And Modi's Twitter handle has asked people to write in on the Narendra Modi app, telling him what they think of the demonetisation.

I want your first-hand view on the decision taken regarding currency notes. Take part in the survey on the NM App. https://t.co/TYuxNNJfIf pic.twitter.com/mWv2frGn3R

Prime Minister Modi, had on November 8, in a sudden and unexpected move, announced that India's two largest currency notes would cease to be legal tender starting that midnight.

His decision took about 86 per cent of Indian currency out there out of circulation and the country has been thrown out of gear ever since.

There have been long lines outside banks with people rushing to exchange their old currency for new but there hasn't been enough new currency to go around, there have been reports of people having trouble getting hold of medicine and groceries, and economic activity has dipped.

Up to 90 per cent of transactions in the country are carried out in cash.

Bringing back India's alleged black money, stashed in Swiss banks, had been a large part of Mr Modi's campaign before the national elections in 2014.

The motion to back the demonetisation was passed by Mr Modi's party, the Bharatiya Janata Party (BJP).

This is the wheat-growing season and the cash crunch has hit farmers hard with media reports saying they are having trouble finding the cash needed to buy seeds and fertiliser.

Meanwhile, the Opposition also met amongst themselves on Tuesday.

They have asked Modi to explain the rationale behind demonetisation in Parliament. They say the Prime Minister must explain his move in the Rajya Sabha or the Upper House, where the government is in a minority, while in the Lok Sabha or the Lower House, they want a debate followed by a vote.

They are reportedly also discussing a nationwide strike to protest the demonetisation and a march on the President's house.