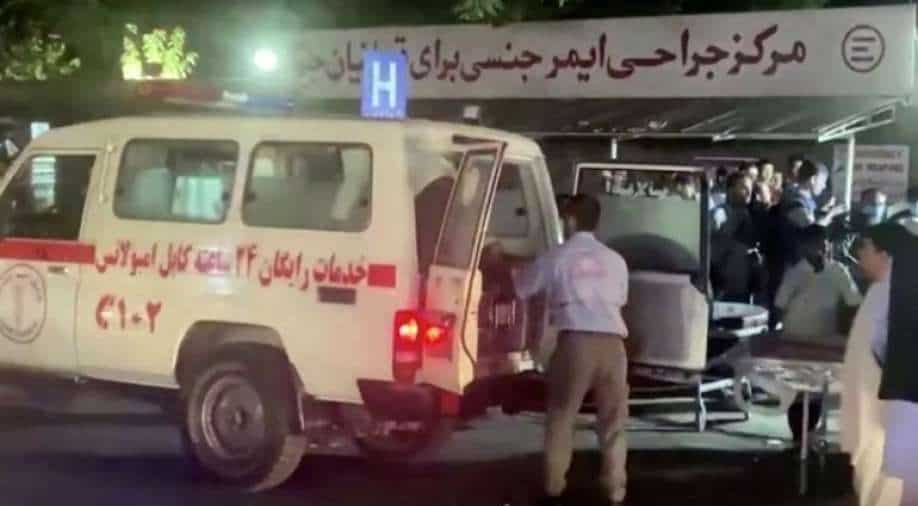 A screen grab shows an emergency vehicle as people arrive at a hospital after an attack at Kabul airport, in Kabul, Afghanistan. Photograph:( Reuters )

"Our thoughts and prayers also go out to the injured. Today’s attacks reinforce the need for the world to stand unitedly against terrorism and all those who provide sanctuaries to terrorists," a statement released by India's Ministry of External Affairs read.

India strongly condemned the deadly bomb blasts that rocked Afghanistan's capital city Kabul on Thursday (August 26), killing at least 13 US soldiers, along with dozens of Afghans, who were waiting outside Kabul airport to flee Taliban-controlled Afghanistan.

The statement released on Thursday (August 26) by India's Ministry of External Affairs read: "India strongly condemns the bomb blasts in Kabul today. We extend our heartfelt condolences to the families of the victims of this terrorist attack."

"Our thoughts and prayers also go out to the injured. Today’s attacks reinforce the need for the world to stand unitedly against terrorism and all those who provide sanctuaries to terrorists," the statement added.

The Islamic State group claimed responsibility for the attacks and the United States President Joe Biden said that he has seen "no evidence" that the Taliban colluded with Islamic State militants in carrying out the deadly attacks.

IN PICS | Dozens of civilians, at least 13 US troops killed in Kabul airport attack

The US President condemned the blasts and promised that the United States would "hunt down" those responsible for the explosions that caused mayhem at Kabul's Hamid Karzai International Airport amid the mass evacuation of thousands of people from Afghanistan.

Biden also informed that he has asked the Pentagon to develop plans to strike back at Islamist militants. He said, "I've also ordered my commanders to develop operational plans to strike ISIS-K assets, leadership and facilities."

More than 100,000 people have been flown out of Afghanistan since the Taliban swept into power on August 15, with Afghans desperate to escape the feared hardline rule of the fundamentalist Islamists.

The Taliban had allowed US-led forces to conduct the airlift, while planning to finalise their own government as soon as the American troops left.

The suicide bombers targeted people trying to reach access gates at the airport, creating scenes of terror and devastation.

Footage shared on social media showed men and women in a tangled mess in the shin-deep water of a drainage canal.

Stunned survivors pulled themselves to their feet, while others desperately shouted for help in searching the carnage for loved ones.

The Italian NGO Emergency said the hospital it operates in Kabul had been overwhelmed by a "massive influx" of more than 60 casualties, 16 of whom were pronounced dead on arrival.