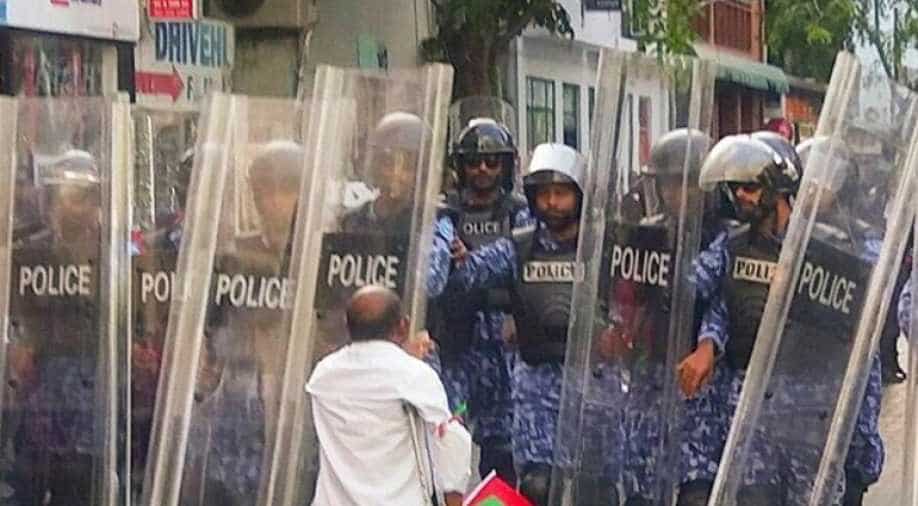 Protests against President Yameen has intensified in capital Male and other cities, as joint opposition continues to maintain pressure on the government to implement the Supreme Court ruling of February 1.

Police has arrested three more Members of Parliament (MPs) on Friday, including Abdulla Shahid, Abdullah Riyaz and Abdulla Latheef. So far, six opposition MPs have been arrested by the police.

Speaking to ANI, Ali Zahir, Dy leader of Adhalat Party blamed President Yameen for the prevailing unrest in the country, "For sure this is direct instruction from him. President Yameen and his government must be treated as a dictator by international community".

The Police specifically targeted President @MohamedNasheed‘s mother three times within an hour. They pushed & shoved her against the wall, & pepper sprayed her at close range.3 times.

She refused to go home;said she will not cower in the face of brutality.

The protesters are demanding safe release of arrested MPs. Ali Hussain, a member of Parliament said in his tweet, "President Nasheed's mother holding a poster of Free MP. Faris, who is the son of President Maumoon. A powerful message to the whole Maldives that injustices will never be tolerated any more".

President Nasheed's mother holding a poster of Free MP. Faris who is the son of President Maumoon. A powerful message to the whole Maldives that injustices will never be tolerated any more. pic.twitter.com/qkf9b3F9G1

The ongoing unrest in the country has severely affected the tourism sector. Large scale layoffs are taking place as resorts are receiving significant cancellations from tour operators.

A majority of resorts and hotels in the island nation are facing over 40 per cent room cancellations per day, which directly affects the employees.

Yoosuf Riffath, CEO of Capital Travel & Tours expressed his concern over the ongoing unrest in the country. He tweeted, "#Maldives is now in a very precarious situation due to the #StateOfEmergency and political instability. #Investor confidence is diminishing, #economy is retracting. It's time for resolving political disposition with meaningful dialogue. No one is above the law".

Situation in Maldives has deteriorated since February 20, when Maldives Parliament approved the extension of the State of Emergency by 30 days, a day after President Abdulla Yameen sought the extension citing threat to national security and the constitutional crisis in the country.

The opposition leaders boycotted the session and called the extension illegal and unconstitutional.