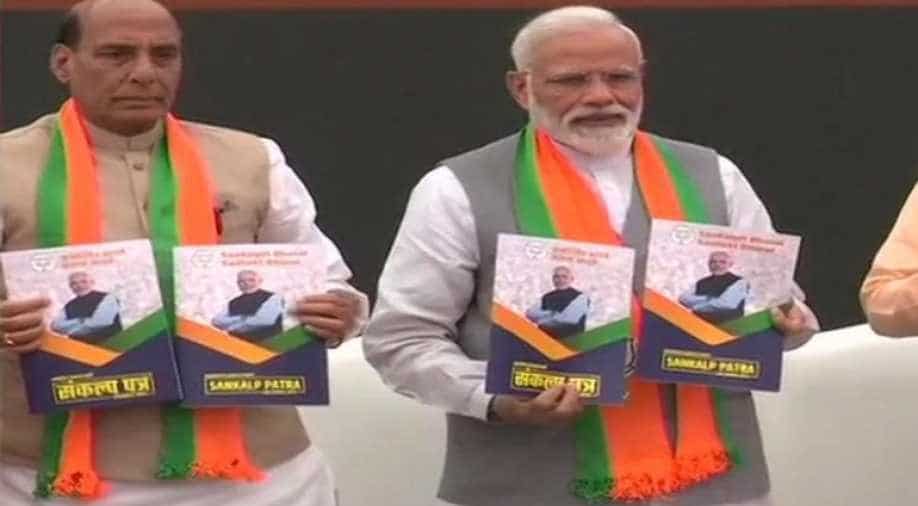 BJP releases their manifesto for upcoming general elections in Delhi. Photograph:(ANI)
Follow Us

Members in favour argued that the UCC was important to uphold the unity of the country and the Constitution’s secular credentials.

"Religion must be restricted to spheres which legitimately appear in the religion, and the rest of life must be regulated, unified and modified in such a manner that we may evolve, as early as possible a strong and consolidated nation. Our first problem and the most important one is to produce national unity in this country. We think we have got national unity but there are many factors -and important factors - which still offer serious danger to our national consolidation, and it is very necessary that the whole of our life, so far as it is restricted to secular spheres, must be unified in such a way that as early as possible, we may be able to say, "Well, we are not merely a nation because we say so, but also in effect, by the way, we live, by our personal law, we are a strong and consolidated nation"- These were the words of  K.M.Munshi, a distinguished member of Constituent Assembly of India and a leader who campaigned for eliminating caste-based discrimination, promoted women’s education and widow remarriages while addressing the Constituent Assembly debate on the issue of Uniform Civil Code.

According to the Directive Principles of the State Policy in the Constitution of India, “The State shall endeavour to secure for the citizens a uniform civil code throughout the territory of India.”

It was the vision of leaders like Munshi, Hansa Mehta, Alladi Krishnaswami Ayyar, Rajkumari Amrit Kaur and Dr BR Ambedkar who keeping in mind the intricacies, variation and dimension of our nation saw the Uniform Civil Code as part of the state’s responsibility’ to establish a single Indian identity instead of multiple religious identities.

Uniform Civil Code was debated on December 23, 1948, wherein the Muslim members opposed it and moved amendments to keep personal laws out of the Constitution’s scope and introduce a provision that operationalised the Uniform Civil Code (UCC) only with the prior assent of the community.

In their opinion, the Uniform Civil Code violated freedom of religion and would create disharmony within the Muslim community and will be an interference in personal law without the approval of religious communities.

Members in favour argued that the UCC was important to uphold the unity of the country and the Constitution’s secular credentials.

Alladi Krishnaswami Aiyar was of the opinion that differential systems contribute to the differences among peoples of India. He said that by not having Uniform Civil Code we were departing from the goal where we wanted the whole of India to be welded and united together as a single nation. His assertion was that without uniformity in civil code, this country will be kept up always as a series of competing communities.

KM Munshi pointed out that even if this clause (Uniform Civil Code) is not put in, it did not mean that Parliament in future would have no right to enact a Uniform Civil Code and stated that Article 19, accepted by the House unanimously, permitted legislation covering secular activities. “The whole object of this Article is that as and when the Parliament thinks proper or rather when the majority in the Parliament thinks proper an attempt may be made to unify the personal law of the country.”

On the question of it being tyrannical, Munshi pointed out, ‘’Nowhere in advanced Muslim countries the personal laws of minorities has been recognised as so sacrosanct as to prevent the enactment of a Civil Code. Take for instance Turkey or Egypt, no minority in these countries is permitted to have such rights. Munshi further said that when you want to consolidate a community, you have to take into consideration the benefit which may accrue to the whole community and not to the customs of a part of it. It is not, therefore, correct to say that such an act is the tyranny of the majority. If you will look at the countries in Europe which have a Civil Code, everyone who goes there from any part of the world has to submit to the Civil Code. It is not felt to be tyrannical to the minority.

The point, however, is this, whether we are going to consolidate and unify our personal law in such a way that the way of life of the whole country may in course of time be unified and secular. If, however, the religious practices in the past have been so construed as to cover the whole field of life, we have reached a point when we must put our foot down and say that these matters are not a religion, they are purely matters for secular legislation. This is what is emphasised by this article.”

BR Ambedkar made a  point that it will not be the first time that Muslims will be governed by a law other than their own. He said, “My honourable friends have forgotten, that, apart from the North-West Frontier Province, up till 1937 in the rest of India, in various parts, such as the United Provinces, the Central Provinces and Bombay, the Muslims to a large extent were governed by the Hindu Law in the matter of succession”.

Hansa Mehta, the member of the Fundamental rights sub-committee, the advisory committee and the provincial constitutional committee, made a significant contribution to the Constituent Assembly debates in trying to make the Uniform Civil Code (UCC) a justiciable part of the constitution. According to her, personal laws were dividing the nation. “It is therefore very essential if we want to build up one nation to have one Civil Code.”

She opined that last rulers (British) created religious and communal minorities in order to help their policy of divide and rule and that policy led to the partition of this country. She said, “We do not want any more partitions. What do the minorities want? What can be their claims? The Constitution guarantees equal protection of the law, equality of status, equality of opportunity; the Constitution guarantees religious rights. What more can the Minorities ask for? If they want privileges, that is not in the spirit of democracy. They cannot ask for privileges”.