Opinion-Jammu and Kashmir: With positive approach on path of progress 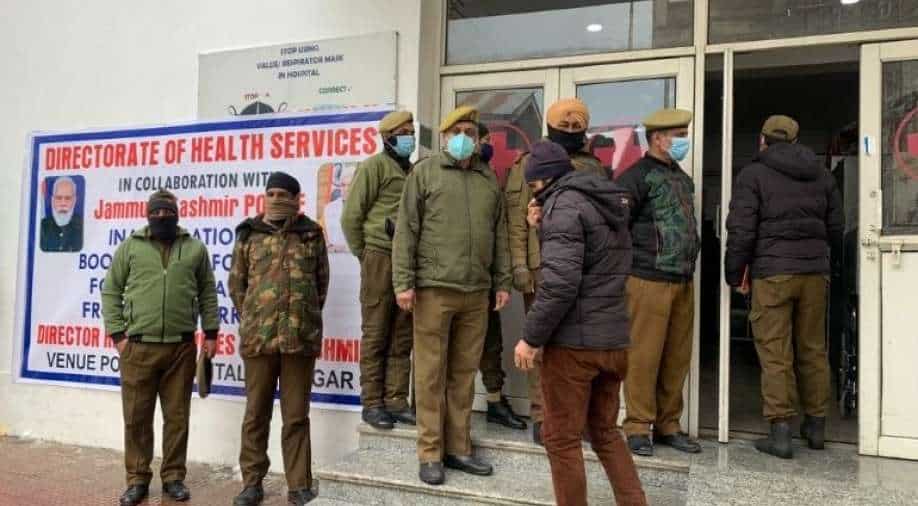 Security personnel can be seen at a vaccination centre in Jammu and Kashmir for a booster dose drive Photograph:( WION )

The provision, article 370 of the constitution, prevented the Indian government from having any say in the affairs of Jammu and Kashmir except in matters of defence, finance, foreign affairs, and communications. This contributed to the province’s struggles: While the rest of India experienced strong social and economic development, Jammu and Kashmir lagged in terms of economic growth, employment, fighting corruption, gender equality, literacy, and many other indicators.

Pakistan has its own stakes in preventing prosperity in Jammu and Kashmir, and in the Ladakh area of Kashmir because a weak economy fuels separatist sentiments in some quarters. This fits into Pakistan’s larger strategy of using terrorism as a political tool. Therefore, it also opposes the repeal of article 370, which legitimized discrimination and hindered economic progress.

The decision of the Indian Parliament to reorganise the province and rescind this article corrects a historic wrong. It opens the door to rejuvenate a moribund economy and promote horticulture, tourism and handicrafts that are the unique strength of its culture. This change is now delivering social and economic justice to a region that was out of step with the rest of the nation.

Article 370 was an obstacle to progressive legislation prevalent in the rest of India, such as affirmative action, equal rights for women, juvenile protection, and safeguards against domestic violence. Laws that protect the right to education and information under the Indian Constitution did not apply in Jammu and Kashmir. Clearly, this prospect for a more prosperous Jammu and Kashmir, and Ladakh, cut the ground under the feet of Pakistan.

In past, we have seen a plethora of comments from Prime Minister Imran Khan of Pakistan and senior officials of his government painting an apocalyptic picture of India’s reorganisation of its province of Jammu and Kashmir — and raising the threat of conflict, including nuclear war, with India.

Under Prime Minister Khan’s watch, the people of Pakistan are reeling under economic depression, with inflation at a five-year high, national debt exceeding gross domestic product, and asking for an International Monetary Fund bailout. Mr. Khan has, of course, every right to run his own economy into the ground. But his determination to inflict similar damage on the province of a neighbouring country must be challenged. What Prime Minister Khan finds difficult to accept is that the Kashmir region is now back on the road to progress and prosperity because the Indian government has repealed an anachronistic and temporary provision of law that has hindered development. Its prime minister claims that he offered to work for peace, progress, and prosperity with India. What he does not say is that the assembly line of terrorists that is a major industry of his country continues without pause.

He suggests that institutions like the Financial Action Task Force, an international organization that investigates terrorist financing, are part of a conspiracy against Pakistan. He obscures the fact that the mastermind of the Mumbai terrorist attack of 2008 has been shielded by Pakistan. And that the Pulwama suicide bombing was carried out by Jaish-e-Muhammad, a United Nations-proscribed terrorist outfit that operates openly from one of his major cities.

Mr. Khan has criticised India for its treatment of Muslims and other non-Hindu minorities. This would be laughable if the reality was not so tragic. When Pakistan was created, its population was 23 percent minorities. This is now down to 3 per cent, a figure that speaks for itself. And there are countless faces — Shias, Ahmadis, Christians, Hindus, and Sikhs — who can testify to this tragic reality. Fellow Muslims are not spared; ask the Shia, the Pashtun, Sindhi or the Baloch people of Pakistan. The irony of seeing Islamabad refusing to recognize the legitimacy of Israel and tolerating anti-Semitic sentiment, but now invoking images of European fascism, is simply astounding. Jammu and Kashmir, and Ladakh, are now in transition. The changes introduced by India have challenged entrenched interests who benefited from the old system at a cost to the people. Incitement and support from across the border for violence and terrorism are to be expected. Many of the restrictions on travel and communications intended to ensure public order and safety have since been relaxed. Preventing loss of life is the highest priority.

India’s actions regarding article 370 had no implications outside of India. Its external boundaries have not changed. What has changed is that there is now hope for development that will help the residents of the region — and that will obstruct Pakistan’s longstanding support of cross-border terrorism. That is why the prime minister concocts alarming scenarios, hoping to stop these improvements. The development will happen, progress will be visible, prosperity will take root and terrorism will fail. India will hope that Pakistan renounces hostility, violence, and terrorism to become the normal neighbour that the entire world desires.

Siddharth Sharma is a freelance journalist and a media facilitator based in Delhi. He has written for many platforms regarding various geopolitical issues with a special focus on the Kashmir Conundrum. His escapades into the remote locations along the Line Of Control to understand the actual ground situation is soon going to be published as a well-documented book.