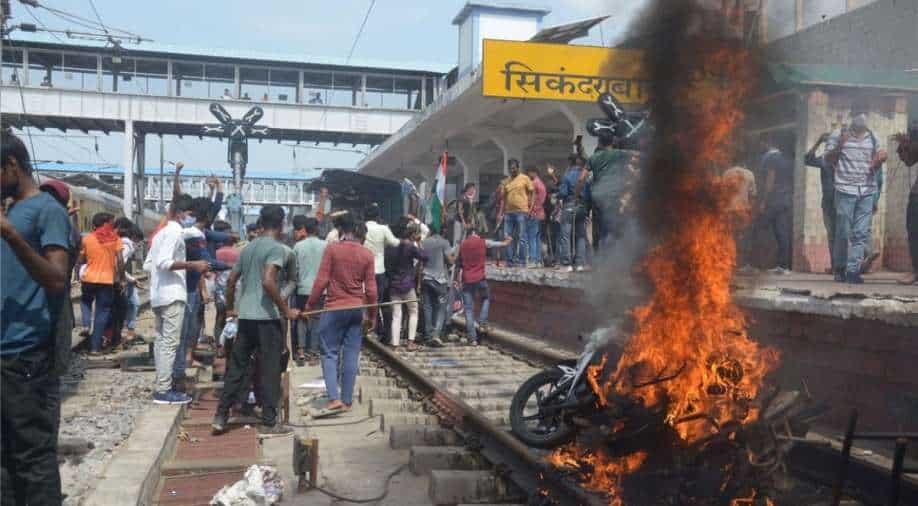 Protests in other states like Bihar, Uttar Pradesh and Haryana continued for the third consecutive day

Amid violent protests across India over the recently announced military recruitment policy, authorities have confirmed that one person died in Telangana's Secunderabad on Friday (June 17). Scores of others have been injured as agitators vandalised the Secunderabad Railway Station and set a train ablaze during a protest against the central government's scheme.

As quoted by India-based news agencies, the Superintendent of Gandhi Hospital, Raja Rao said, "Around 13 people were brought to the Gandhi hospital. One person was brought dead. After the panchama is done on the dead body, a post-mortem examination will be conducted."

"For four persons pellet bullet injuries have been noticed and for others, whether these are injuries from bullets or rubber bullet it is yet to be examined. The remaining injured are being examined by the doctors on duty. One person`s situation is critical, he has received a chest injury," the hospital superintendent said.

On June 14, the Union Cabinet approved the Agnipath recruitment scheme. As claimed by the government, it provides an opportunity for Indian youth to serve in the regular cadre of the Armed Forces for a period of four years. Soldiers who are recruited under this scheme will be known as Agniveers.

Meanwhile, in the Secunderabad region, the official informed that an investigation is still underway and said that two persons are in need of surgery while the condition of one person is critical. Others brought to the hospital are out of danger.

Protests in other states like Bihar, Uttar Pradesh and Haryana continued for the third consecutive day.