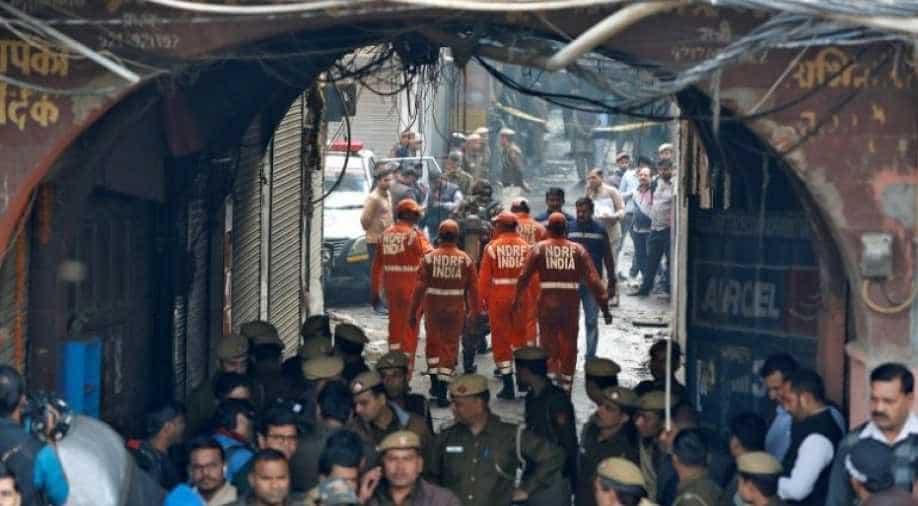 National Disaster Response Force personnel gear up as they prepare to access a factory site after a fire broke out, in Anaj Mandi area of New Delhi on December 8, 2019. Photograph:( AFP )

At least 43 people died after a massive fire broke out in the factory on Sunday morning, police said, around 62 people were rescued from the building by fire tenders.

Two persons were rushed to hospital after a fire break broke out at Anaj Mandi on Monday in the same premises where 43 were killed in a massive blaze on Sunday.

Soon after receiving the call of fire, four fire tenders were rushed to the spot.

Speaking about the rescue operation, Delhi Police Constable Naresh said: "When we received a PCR call, we immediately reached the spot with Station House Officer. Fire tenders too rushed to the spot."

"We were told by the SHO to save as many people as we can. We found a way to enter the building. We first rescued a person from the building where the fire broke out and then two other persons from the backside, who were shifted to a hospital for medical aid," he said.

This was the third incident of fire in three days at Anaj Mandi.

At least 43 people died after a massive fire broke out in the factory on Sunday morning, police said.Around 62 people were rescued from the building by fire tenders.

34 dead were confirmed by the Lok Nayak Hospital and 9 by the Lady Hardinge Hospital, police said.

Delhi Chief Minister Arvind Kejriwal had announced a compensation of Rs 10 lakh to families of those who lost their lives in the tragic incident.

Additional assistance of Rs 1 lakh had also been announced to those injured.

The Delhi government has also ordered a magisterial inquiry into the incident and sought a report within seven days.