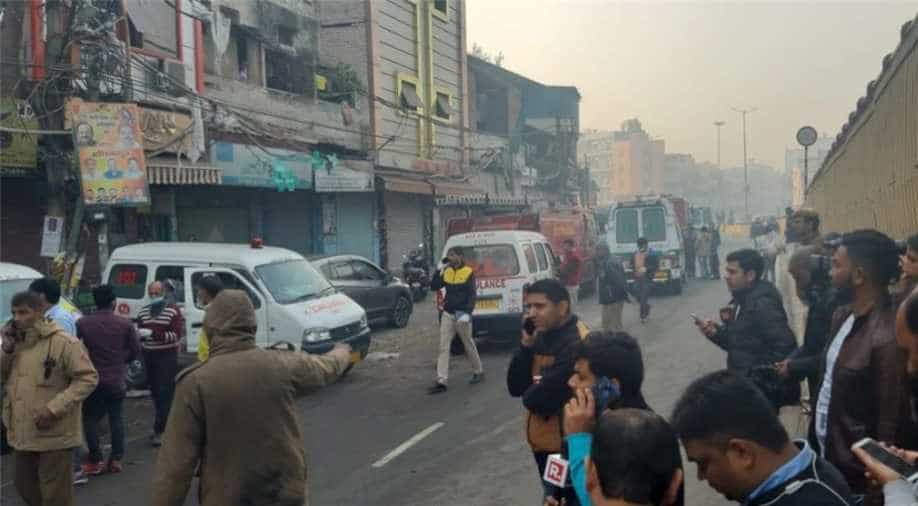 Soon after receiving the report, many fire tenders were rushed to the spot to douse the fire and to carry out rescue operations. Given the intensity of the fire, 10-12 more fire tenders had to be sent at the spot.

A major fire broke out in a multi-storey building in Anaj Mandi near Rani Jhansi Road, Delhi, in which more than 43 people have died of suffocation and a large number of people were evacuated.

According to fire department sources, the information about the fire incident was received around 5:30 AM and immediately after that around 30 vehicles of fire brigade were sent to the spot.

At least 50 people have been rescued so far. The fire has been doused and rescue efforts are underway.

"A fire broke out in a 600 sq feet plot. It was very dark inside. It is a factory where school bags, bottles and other materials were kept," said Deputy Fire Chief Officer Sunil Choudhary.

Delhi: Fire broke out at a house in Anaj Mandi, Rani Jhansi Road in the early morning hours today, 11 people rescued so far; 15 fire tenders present at the spot pic.twitter.com/GG5mLEVVrf

Kishore Kumar, Medical Superintendent of Lok Nayak Hospital, had told ANI: "We got 14 casualties, of which 10 were brought dead. The causalities have been brought from basti area near filmistan. Our team of doctors is attending to those who are alive."

Mohammad Asim, a local said, "The flat was given on rent. It was a short circuit. Fire brigade team and police teams did a great job."
The fire has been completely doused and rescue operations are currently underway.