Shiv Sena was not born to do communal politics: Senior NCP leader 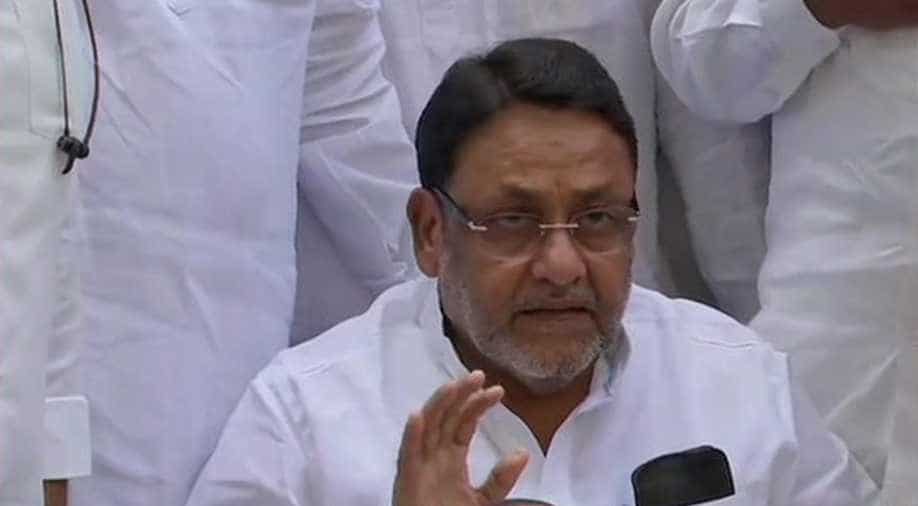 Shiv Sena was not born to do communal politics. It was spoiled by BJP, said senior NCP leader on Tuesday.

Shiv Sena, Congress and NCP have submitted a letter to Maharashtra Governor on Monday regarding the support of 162 MLAs to form a government in Maharashtra. Majority support of 145 MLAs is required for government formation in the state. Traditionally, allies Congress and NCP are political opponents of Shiv Sena. But, the three parties have come together after Shiv Sena had a fallout with its long-term ally BJP over the power-sharing agreement.

"Shiv Sena was not born to do communal politics, they came into existence to serve the people of Maharashtra. Shiv Sena was spoiled after joining hand with BJP, " senior NCP leader Nawab Malik said, reports ANI.

Nawab Malik,NCP: Shiv Sena was not born to do communal politics , they came into existence to serve the people of Maharashtra. Shiv Sena was spoiled after joining hand with BJP pic.twitter.com/n4LPqqlaOo

He also said that NCP supremo Sharad Pawar asked Uddhav Thackeray to become CM of Maharashtra, to which he agreed.

Nawab Malik,NCP: Sharad Pawar saheb had said that Uddhav ji will be the Chief Minister and Uddhav ji has also agreed to this https://t.co/SoMCCT64AI

Malik said that NCP-Shiv Sena-Congress alliance will last for a long time and this alliance will be the beginning of BJP's end. "BJP has become very arrogant, " Malik said.

Earlier today, Devendra Fadnavis resigned as the chief minister of Maharashtra. Fadnavis said that he took the step after NCP's Ajit Pawar submitted his resignation as deputy CM. The decision came after the Supreme Court ordered conducting a floor test in order to test the majority of BJP government in the Maharashtra Assembly.

In a surprising move, Fadnavis took oath as Maharashtra CM after getting support from Sharad Pawar's nephew Ajit Pawar. Before this development, Shiv Sena, NCP and Congress were in the final stages to form an alliance in Maharashtra.

The results of Maharashtra Assembly elections were declared on October 24. BJP won the maximum number of seats: 105. Shiv Sena, NCP and Congress claimed 56, 54 and 44 seats respectively.