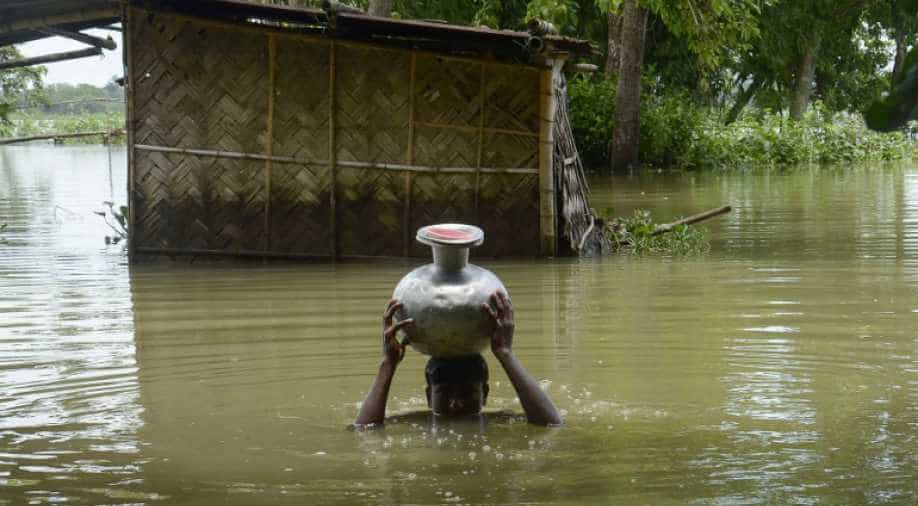 The north-eastern state, which was recuperating after several rounds of floods this year, again saw 306 acres of land submerged in the fresh wave ||At least 86 villages in seven revenue circles had been affected by the fresh deluge

A fresh wave of floods has hit Assam, submerging five districts and affecting 78,275 people, an official said on Sunday.

The north-eastern state, which was recuperating after several rounds of floods this year, again saw 306 acres of land submerged in the fresh wave. Nearly 16,000 animals and poultry had also been affected, added the Assam State Disaster Management Authority (ASDMA) official.

Rains across the state and in neighbouring Arunachal Pradesh and Meghalaya have caused flooding in the districts of Lakhimpur, South Salmara, Goalpara, Hojai and Karbi Anglong.

At least 86 villages in seven revenue circles had been affected by the fresh wave of deluge with Goalpara on the Assam-Meghalaya border being the worst-hit, an ASDMA report said.

The Dhansiri river at Numaligarh in Golaghat was flowing above the 'danger' mark, according to a Central Water Commission (CWC) bulletin.

The administrations of the flood-hit districts had set up 18 relief camps, where 9,994 people had taken shelter, the ASDMA said.

The State Disaster Response Force (SDRF) had rescued 30 marooned people from Goalpara, where an embankment at Khorija Manikpur was damaged, the ASDMA said, adding that roads and culverts were damaged at various places in the five districts.

The third wave of the devastating floods last month had claimed 76 lives, taking the toll in flood-related incidents in the state to 160 this year, including eight in the capital, Guwahati.

Chief Minister Sarbananda Sonowal has directed the deputy commissioners of the flood-hit districts to step up the rescue-and-relief operations and ensure a stock of adequate relief material for the marooned people.

He has also asked the deputy commissioners to ensure the availability of all the essential items at the relief camps, besides making all-out efforts to provide food, drinking water, baby food, fodder and medical help in the flood-hit areas, a government release said.

The chief minister has also directed the ASDMA to maintain a close coordination with the district administrations and extend all the support to them, the release added.