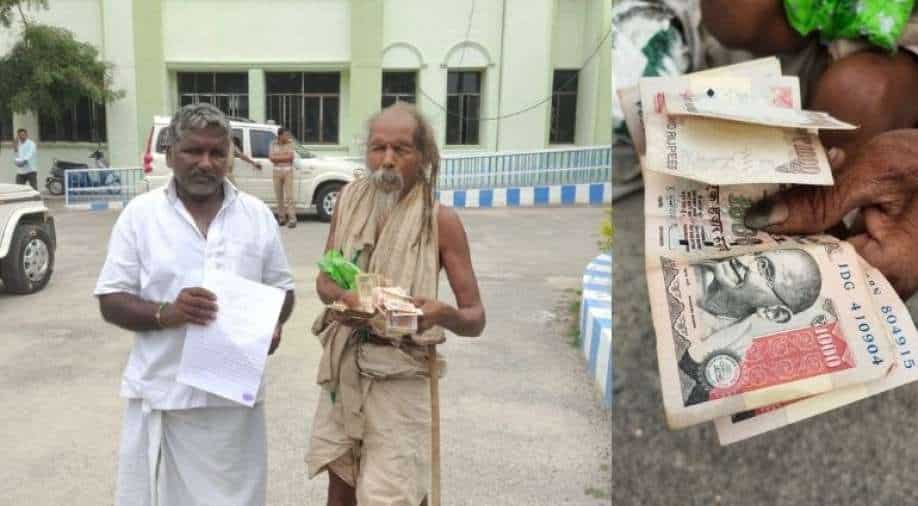 Chinnakannu shows his petition to the collector and the demonetised notes Photograph:( WION )

In an unfortunate turn of events, Chinnakannu, a visually challenged septuagenarian in Tamil Nadu recently realized that his life savings held in cash were not even worth the paper it was printed on.

Living off the alms offered by people, the destitute senior citizen over several years managed to save INR 65,000 and had kept the savings in a place he considered safe.

However, owing to illness and other factors, he, unfortunately, had forgotten all about his cash savings.

Only recently did the elderly person come to know of demonetization, which was announced on November 8th 2016, by Indian Prime Minister Narendra Modi.

Chinnakannu, a Visually-challenged septuagenarian, seen at Krishnagiri, Collector Office, with a wad of demonetized Rs.1000&500 notes amounting to Rs.65K

He hopes to get it converted to usable cash.. he had kept the money safely & had forgotten about it for many yrs.. pic.twitter.com/FOiarsh7N2

Apparently, a friend of his told him that the 'old notes' were useless.

It was on Monday that the senior citizen approached the Krishnagiri district collector, with the help of a cobbler.

The senior citizen has petitioned the collector to help him out in converting the demonetized currency (consisting of Rs1000 and 500 notes) into legal tender.

The issue came to light after pictures and videos of the visually challenged person holding a wad of invalid currency notes were widely shared on social media.

Also read | All six members of a family, spanning across three generations killed in Kerala floods

In the video, Chinnakannu says that he found the cash only on Sunday and realized about the notes being illegal tender and that he didn’t know about this earlier. He added that he was in the Collector office to ensure that this currency can be converted into usable currency (legal tender).